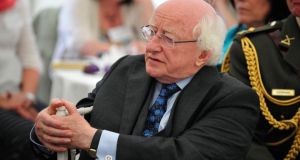 President Michael D Higgins called for harmony among European nations and said the Greek crisis must not be allowed to reoccur. He made his comments as he hosted German president Joachim Gauck last night.

Speaking at a State dinner at Áras an Uachtaráin in honour of Mr Gauck and his partner, Daniela Schadt, Mr Higgins said European citizens stood at a challenging moment in time.

“Events over the weekend and in the preceding weeks and months have been deeply distressing for the Greek people, for all of us who wish to see greater social, political and economic harmony among the nations of Europe, ” he said.

“It is critically important that we learn from the experience of recent times and provide the appropriate discourse and leadership which Europe needs to ensure that such episodes don’t reoccur.” Mr Higgins said “the appropriate ethical will” of all European citizens, “thinking in solidarity”, would be required to put “the stamp of humanity on our times and our institutions”.

On Wednesday he will accept an honorary doctorate from NUI Galway. He is also due to visit the Irish Centre for Human Rights and deliver a speech, and visit a farm and the Cliffs of Moher.

He was yesterday greeted at Áras an Uachtaráin by Mr Higgins, before taking part in a wreath-laying ceremony at the Garden of Remembrance.