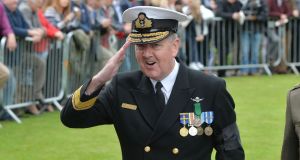 Vice Admiral Mellett: nominated by government as chair of the EU’s military committee, the highest military role in the union. Photograph: Alan Betson

The Government is to nominate the chief of staff of the Defence Forces, Vice Admiral Mark Mellett, for appointment to the highest military position within the European Union.

If appointed chairman of the European Union Military Committee, on which he has been Ireland’s representative for the past two years, Vice Admiral Mellett would be giving military advice directly to the EU’s High Representative of the Union for Foreign Affairs and Security Policy, currently Federica Mogherini.

The position, which is for three years, will become vacant in November 2018 when the incumbent, Gen Mikhail Kostarakos of Greece, retires. If appointed, Vice Admiral Mellett would relinquish his command as chief of staff of the Defence Forces, to which he was appointed in September 2015.

The decision to nominate Vice Admiral Mellett to the military committee was taken at Tuesday’s Cabinet meeting. Afterwards, the Minister of State for Defence, Paul Keogh, said he was a “progressive and innovative chief of staff”.

“Ireland is one of the strongest contributors to Common Security and Defence Policy operations and in particular the role [these] can play in UN-mandated peacekeeping operations. In that regard, the nomination of Vice Admiral Mellett as chairman of the [EU Military Committee] reinforces that commitment and provides a positive and valuable profile for Ireland in the area of security and defence within the EU.”

Previous chairs of the committee have included the chiefs of staff of defence forces in Sweden and Finland. For an Irish chief of staff to occupy the chair of the committee would be seen in Defence Force circles as bestowing very considerable prestige on Ireland.

“It would put Ireland at the heart of EU military matters, on which we have a strong record,” commented one defence source.

The move to nominate Vice Admiral Mellett follows July’s Cabinet decision to have the Naval Service mission in the southern Mediterranean formally join the EU migrant search-and-rescue effort. Hitherto the Naval Service was participating on the basis of a bilateral agreement with Italy, rather than as part of the EU effort.

The military committee, on which all 28 EU member states have representatives – usually their chiefs of staff or the chief’s permanent military representatives – is concerned with crisis management and is part of the union’s External Action Service – essentially, the EU’s foreign service.

As chair of the EU military staff, and therefore a member also of the political and security committee, Vice Admiral Mellett would have considerable influence in helping fashion EU crisis management and humanitarian missions during his term, if elected.

The previous most senior role for a member of the Defence Forces at EU level was when Lieut Gen Pat Nash led the EU military mission to Chad from 2007 to 2009.

The move to nominate Vice Admiral Mellett may prompt critical comment from those who argue that holding such a position has implications for Ireland’s neutrality.

Others will argue, however, that by occupying such a senior position, Ireland’s profile within the EU generally would be enhanced, and the country would gain situational awareness on evolving EU security and defence policy, without any compromise to neutrality.

The External Action Service currently has 16 missions, nine of them civilian, six of them military. They are in Somalia, Mali, Niger, the Central African Republic, Libya and the Palestinian Territories, Bosnia and Kosovo, Ukraine, Moldova and Georgia.

The EU sees the missions as, variously, helping keep the peace and preventing conflict, enhancing security, supporting the rule of law and preventing trafficking.