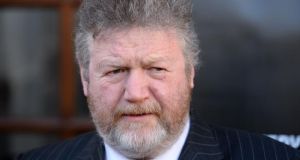 Minister for Children and Youth Affairs Dr James Reilly: has indicated he would like to restore the capitation grant to its previous level. Photograph: Dara Mac Donaill.

The reversal of cuts to State funding to childcare and increasing the money provided by the exchequer above its previous levels is being considered as part of an overall childcare package.

As part of the free pre-school year provided by the State, childcare providers are paid capitation grants by the Department of Children but these were cut by the Coalition in its first budget in December 2011.

As a result of the cuts, the childcare staff-child ratio for the pre-school year increased from one to 10 to one to 11.

The Coalition has agreed in principle to the introduction of a second year of free pre-school, although this is unlikely to happen in the remainder of the Government’s term.

Dr James Reilly has indicated he would like to restore the capitation grant to its previous level but sources with knowledge of the options being discussed by a group set up to examine childcare say a further increase is being considered, although the exact level is not known.

The Early Childhood Care and Education (ECCE) programme provides for one free pre-school year for all eligible children in the year before they start primary school. The programme is normally provided for three hours per day, five days a week, over 38 weeks.

Sources said the Coalition wants to see increased standards across the sector before it commits to a second free pre-school year, which receives about €200 million in funding.

“While the Government did manage to protect that year, what we did have to do early on was take €2 off the capitation rate and the minister is already on record as saying we would like to restore that, perhaps we might be able to go a little bit further, inflation adjusted, that sort of thing,” said a source.

The higher capitation rate for third-level qualifications is a way of incentivising childcare providers to improve their standards.

In response to a parliamentary question earlier this year, Dr Reilly said there are about 4,200 pre-school services participating in the ECCE programme.

“The funding provided under the programme is a guaranteed source of income, paid in advance, and is an important support to services at this time,” the source said.