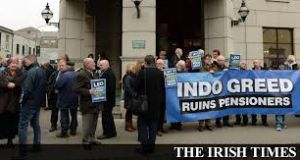 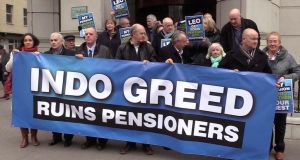 The Government believes it will not have to go to the High Court to challenge the attempt by Independent News and Media to impose major pension cuts on hundreds of retired workers.

Independent News and Media proposed last month that it would wind up the pensions schemes and impose cuts of 30 per cent on pensions that have already been cut by 40 per cent.

Minister for Social Protection Leo Varadkar signalled recently that he would intervene in a forthcoming High Court case and had sought the advice of the Attorney General, Máire Whelan.

Now, however, senior government officials suggest that they believe a resolution can be found between the company and the trustees, and the National Union of Journalists and Siptu.

Reluctant to go further, the Minister’s spokesman said he desired to ensure that the dispute was “brought to a conclusion as soon as possible for the benefit of everyone concerned”.

Mr Varadkar met with Pensions Authority chairman David Begg last week, while the latter has also held talks with the trustees of the INM pension schemes.

Meanwhile, Mr Begg, the former general secretary of the Irish Congress of Trades Unions, is also seeking to meet with leading INM executives and, separately, with the company’s chief executive, Robert Pitt.

The Government can go to the High Court to challenge the closure of defined benefit schemes, as it did at the time efforts were made to close an Aer Lingus scheme before the airline was sold off.

“There is some thought that a workable solution can be found and that this could involve transferring the deferred members onto an ongoing pension scheme but also making a significant contribution to the existing scheme.

“That could mitigate any High Court action because there will be no significant restructuring. There is a belief that this could be going the way of the recipients. Obviously the Government’s concern is with those,” said a source.

INM pensioners lost about 40 per cent of their entitlements in a 2013 agreement under which the company undertook to put €5.6 million a year into the schemes for 10 years.

INM’s balance sheet will be about €24 million better off if capital restructuring is ratified by the High Court and there will be a projected end-of-year cash reserve of €86.4 million.

The Government is examining whether further legislative protections are required to ensure this is not repeated by other companies.

Mr Varadkar is consulting with Mr Begg and his Government colleagues about how to proceed.

Whatever legislative change is made it will not be retrospective, the Minister said.

The Labour Party has proposed a Bill to amend the Pensions Act by protecting workers when their defined benefits scheme is being wound up.

Willie Penrose TD said he will seek to introduce this Bill when the Dáil returns in January.

Mr Penrose said a dangerous precedent could be set whereby profitable companies can walk away from their pension obligations.

He said: “And where is the incentive for workers to save for their retirement if they cannot be guaranteed their rights and lifetime savings will be protected in the future?

He said: “In seeking to amend the 1990 Pensions Act, the Bill the Labour Party is proposing would include employers’ obligations when it comes to funding issues, including when a relevant scheme, i.e, a defined benefits scheme) is being wound up and when the employer has not become insolvent.”