Politicians react to O’Leary swipe at vote for ‘lunatics’ 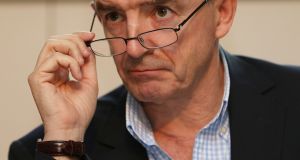 “The worst governments we have had here is where they have been held to ransom by one or two independents,” says Michael O’Leary. Photograph: Nick Bradshaw/The Irish Times.

Michael O’Leary’s description of Independent TDs as “lunatics” has been rejected as “appalling” by one deputy.

In an interview on RTÉ Radio’s Countrywide programme at the weekend, Mr O’Leary said people needed to vote for parties capable of running the country. “Ultimately Independents do nothing. Independents are grandstanders. They are not going to get into government.

“The worst governments we have had here are where they have been held to ransom by one or two Independents,” he said.

Mr O’Leary said there was a need for stable government to take on issues, including the national debt and lowering taxation for the middle class.

“I think there is a local popularity contest or the local lunatic [contest],” he said of the elections.

“It’s all very well for people to be running around electing the local favourite or the local lunatic but at the end of the day we have got to be a bit more sensible. We need to, whenever the next election comes around, vote in parties who are capable of running the country for a four or five-year period.”

However, Independent TD Finian McGrath said the comments were “appalling”.

He added that “the only ones trying to form a stable government are the Independents”.

The Dublin Bay North deputy said: “He needs to come off Planet Michael and see that a group of Independent TDs are the only ones turning up to try and fix our economy.”

Rejecting Mr O’Leary’s view that people should vote for parties capable of running the country for four or five years, Mr McGrath said it was not that simple. “Politics is more complex.”

Referring to Sinn Féin’s economic policies, Mr O’Leary said: “The idea of someone like Sinn Féin [with a policy that states] well we’ll tax the super-rich – they tried that in England and many other countries; you try to tax the super-rich to some super extent [and] we’ll all disappear, we’ll all go offshore.

“I don’t want to go offshore but if somebody in the Sinn Féin party thinks I’m going to pay 80 or 90 per cent tax, I’ll simply move, I’ll emigrate. It doesn’t work.”

Mr Doherty said this claim was “nonsense” and “had no basis in reality”.

“Sinn Féin has never argued for tax rates this high,” he said. Those with the deepest pockets should pay the biggest share for public services, but “nobody has ever articulated that we would impose such punitive tax levies”.

“Income over €100,000 should be subject to an additional seven per cent of tax, which falls nowhere near that which Mr O’ Leary is suggesting. ”

He said there had been a wealth tax in France for many years which had worked well. When it was increased a number of people left, including the actor Gerard Depardieu. “He had a tantrum and moved to Russia. But many people viewed that as unpatriotic.”

The Dublin South-Central TD said Mr O’Leary “could go to Russia with Depardieu”.