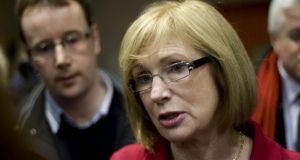 Minister of State Jan O’Sullivan: her letter lends authority to a proposal that already has widespread support. Photograph: Sean Curtin/Press 22

Minister of State for Planning Jan O’Sullivan has put her weight behind proposals for a levy on vacant development sites to end city centre land hoarding.

Ms O’Sullivan has written to Minister for Finance Michael Noonan to support the submission made by Lord Mayor of Dublin Oisín Quinn for the levy to be introduced in the forthcoming budget.

The levy is intended to combat the phenomenon of land hoarding, which has seen key sites in towns and cites left unused for many years.

Local authorities have the power to impose rates on vacant commercial buildings and to tax derelict buildings, but owners of vacant sites are not subject to any tax or charge.

If a vacant site levy was introduced, development firms that failed to pay it could be forced into liquidation, with lands sold to pay what they owe.

Beneficial use
Writing to Mr Noonan, Ms O’Sullivan said the levy would raise finance for local authorities, promote equity between all property owners and, “most importantly”, encourage development and beneficial use of sites.

The principle of the levy was in line with Government policy, she said, in particular the new guidelines on development contributions and retail planning, and would promote occupancy and development of “core town centres”.

She said she particularly wanted to highlight the point made by Mr Quinn that while commercial businesses and homeowners contributed to local Government funding, it was only the owners of vacant sites who made “no contribution”.

She said the issue of State-owned sites that had been left vacant should also be examined, and she wanted a role in feeding into the formulation of policy in that regard. The Office of Public Works and local authorities own many prominent, unused sites.

Ms O’Sullivan’s letter lends authority to a proposal that already has widespread support. Mr Quinn led a city council task force which prepared the submission and included representatives from Ibec, Ictu, the ESRI and several academics and business organisations.

A rate for the levy has not been specified in the submission, but Mr Quinn has said it could be up to 10 per cent of the value of the site. If the levy is not paid, the council could force the company owning the land into liquidation, he said. The liquidator would then sell the site and the levy debt would be paid.

In Dublin city centre alone 235 vacant plots of land of varying size have been identified by the city council. The council is in the process of trying to match the sites to owners, in preparation for what it hopes will be a positive reaction from Mr Noonan to the levy proposal.

The council said it had yet to determine how many of these sites were in its ownership. The OPW has said it owns four plots of vacant land in the city. It has recently published a property asset management plan to deal with its vacant lands and buildings around the State.