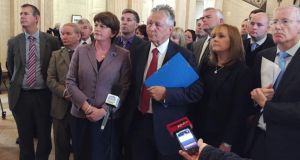 Northern Ireland First Minister Peter Robinson (centre) at Stormont where he said there will be no further routine meetings of the power-sharing Executive until the political crisis is resolved. Photograph: Lesley-Anne McKeown/PA Wire

Talks aimed at securing the future of Stormont begin on Tuesday against a background of recrimination after the DUP said it would boycott meetings of the Northern Ireland Executive until the crisis is resolved.

First Minister Peter Robinson also raised the possibility of Assembly elections by warning that “as a last resort” he would withdraw his Ministers from the Executive if it is clear talks will fail – a move that would collapse the power-sharing administration.

Mr Robinson said the Executive would meet only in “exceptional circumstances” during the talks.

He announced his move after the Assembly business committee last week rejected his call for Monday’s return of the Assembly to be postponed until these negotiations were completed.

He took this action because the “impartial advice that the murder of Kevin McGuigan involved members of the Provisional IRA who are associated with Sinn Féin brought about a watershed moment in the operation of the Northern Ireland Assembly”.

Secretary of State for Northern Ireland Theresa Villiers is due to update the House of Commons on Tuesday on the Stormont crisis, which was caused by a police assessment that some IRA members were involved in Mr McGuigan’s killing last month, albeit without the sanction of the IRA leadership, and by the deadlock over welfare reform.

Ms Villiers is then scheduled to join Minister for Foreign Affairs Charlie Flanagan and the North’s five main parties for the beginning of new talks aimed at dealing with the IRA issue and seeing implementation of the stalled Stormont House Agreement.

At the British Irish Association conference in Cambridge at the weekend, Taoiseach Enda Kenny, Ms Villiers and Mr Flanagan urged all parties to engage in talks that would resolve the main issues.

Ms Villiers also threatened that Westminster would take over responsibility for welfare if the deadlock was not ended.

He also warned: “If it becomes apparent to us that a satisfactory resolution in the talks is not possible then . . . as a last resort ministerial resignations will follow.

Sinn Féin Assembly member Conor Murphy said his party would not be diverted by what he characterised as Mr Robinson’s response to the decision of the Ulster Unionist Party to withdraw from the Executive over the killing.

“We are not threatening the institution,” he said. “We are here to do business. We are not going to allow ourselves to be distracted.”