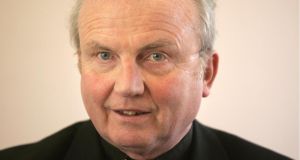 Bishop Donal McKeown: claimed Mr Robinson had suggested that “certain vested interests, by implication the Catholic Church, were the ones who were blocking movements towards that [integrated education]”. Photographer: Dara Mac Dónaill

First Minister Peter Robinson has weighed into a developing quarrel over integrated education between the auxiliary Catholic Bishop of Down and Connor Donal McKeown and the DUP.

Mr Robinson said yesterday that Bishop McKeown had “somewhat lost the plot” following his comments that the Catholic community viewed the DUP’s stance on integrated education as “nakedly sectarian”.

Bishop McKeown claimed Mr Robinson had suggested that “certain vested interests, by implication the Catholic Church, were the ones who were blocking movements towards that [integrated education]”.

“That certainly was perceived in the Catholic community as nakedly sectarian – talking about reconciliation, but ultimately saying the fault is the Catholics, they really are the ones who are to blame and, specifically, the Catholic Church,” the bishop added.

“I suppose at the present time kicking the Catholic Church really won’t lose you too many votes in many places,” Bishop McKeown said on BBC Radio Ulster’s Sunday Sequence religious affairs programme.

His comments followed on US president Barack Obama’s criticism of segregated education ahead of his attendance at the G8 summit in Fermanagh two weeks ago.

“If towns remain divided – if Catholics have their schools and buildings, and Protestants have theirs; if we can’t see ourselves in one another and fear or resentment are allowed to harden – that too encourages division and discourages co-operation,” Mr Obama told an audience of mostly young people in Belfast.

Mr Robinson was previously criticised by the Catholic Primate, Cardinal Seán Brady, when in a speech in 2010 he described the current education system in Northern Ireland as a “benign form of apartheid”. He said he had no objection to church-run schools but he objected to the state funding them.

It suggested that schools in the North should be forced into a single system which was a “stark warning to all those who respect diversity and the rights of parents”.

Mr Robinson was yesterday dismissive of Bishop McKeown’s criticism. “How anybody who is looking for shared education can be seen to be sectarian is beyond me and beyond everyone else.”

DUP education spokesman Mervyn Storey also entered the controversy to add that Bishop McKeown was “on the wrong side of the argument” and should listen to views within the Catholic community.

The Catholic bishops should “come into the 21st century”, he said.

Political ends
Separately, in his BBC interview, Bishop McKeown said the DUP and Sinn Féin were exploiting sectarianism for their own political ends.

He said that because of its united Ireland ambitions, Sinn Féin “cannot afford to make Northern Ireland work too well in the UK”.

Deputy First Minister Martin McGuinness said Bishop McKeown’s comments were “a highly political attack on my party’s strategy for a united Ireland” and were “worthy of any SDLP press operation”.