Party plans for return of Halawa siblings after release in Egypt

Fate of brother to be known on Saturday 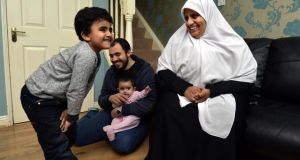 Nosayba Halawa celebrates the iminent release of her three sisters from detention in Egypt, with her children Khallad (4) and Aisha and her husband Hesham Abouhemid at their home in Firhouse, Dublin. Photograph: Alan Betson/The Irish Times

Nosayba Halawa is planning three parties in one when her sisters and brother return home to Dublin, after almost four months detention in Egyptian prisons.

Two of her sisters had birthdays in prison, so these as well as their release will have to be celebrated.

Omaima, who turned 21 in prison, and Soumaia, who had her 28th, were jailed without charge along with Fatima (22) and their brother Ebraheem (17) during clashes between supporters of ousted president Mohamed Morsi and security forces.

Summer holiday
They were arrested after they had taken refuge in Cairo’s Al Fateh mosque during the violence . They had all been in the country for a summer holiday and to visit family. Speaking at her Firhouse home in Dublin Ms Halawa said she got a phone-call from her sister Khadija, who is in Cairo, at about 11.30 yesterday morning.

“She was at the prison to visit our sisters and they just told her they were about to be released. Then about two minutes later I got a call from the Department of Foreign Affairs. They said, ‘I presume you have heard the good news’. I was crying I was so happy and then I said a thankful prayer.”

It remained unclear last night when her sisters would be released but it was expected they would before the weekend.

Their younger brother, however, may face another 45 days in prison. They will learn his fate at a court hearing on Saturday. Ms Halawa said her sisters would probably come home very soon after being released, but her other sister and her mother, Amina Mostafa, would remain in Egypt until her little brother is released.

Asked how they all are she described them as: “Okay”.

‘Very fearful’
“Some days they are strong and other days they are weak, crying. You know the whole situation there, there is no rule of law. How you are treated, everything depends on the mood of the person in front of you.

“That makes you very fearful because they could do anything. They could kill you in prison and then say it was a suicide. The situation in Egypt is destroying everything.”

The past months since their arrest on August 18th, she said, had been “so, so stressful. They were never charged with anything, but we never knew when we would see them again, when they would be home.

“We have had a lot of contacts with the Department of Foreign Affairs. They have been updating us, phoning us all the time and we had some meetings with them. I was phoning them, sometimes even at weekends so I hope I was not annoying them.”

Passports taken
Her siblings had their passports taken when they were arrested and so would have to have travel documents reissued. When they arrive back there will be a “big welcome party at the airport,” she smiled. She said her son, Khallad (4), was particularly looking forward to celebrating his aunts’ birthdays too.

“He is really waiting for the birthday parties. When it is other people’s birthday it is like his birthday too,” she said.