PAC to hear from Garda whistleblower in private

Contentious vote avoided despite members’ concerns over nature of work 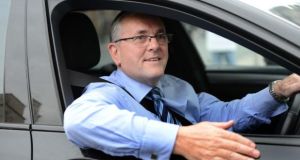 The Public Accounts Committee has decided it will hear evidence from a garda whistleblower on the penalty points controversy in a private session on Thursday.

The committee held a three hour meeting this evening to decide its approach, and agreed that Sgt Maurice McCabe should give evidence.

Sources said numerous TDs questioned why the PAC was taking on this work, but agreed to allow the private session in order to avoid a contentious vote.

Independent TD Shane Ross and Sinn Fein’s Mary-Lou McDonald are understood to have called for a vote.

The meeting adjourned following this request but reconvened soon after, when deputies agreed to hear from Sgt McCabe, even though the majority disagreed with the PAC taking on the penalty points issue.

“It’s pointless but the view was not to establish precedent of a vote,” one source said. “It would undermine the integrity of the committee”.

“The PAC is looking at systems processes and procedures used in the management of the fixed charge notice system and whether possible weaknesses in systems and in controls could potentially have led to a loss to the exchequer,” Mr McGuinness said.

“The Garda Ombudsman will investigate the allegations of multiple incidents of wrongful cancellations which are outside the remit of the Committee.

“The work of the PAC is not finished and the Committee needs to do a report with findings and recommendations based on evidence that outlines potential loss of revenue and weaknesses in the system.

“It may well be that the whistleblower has evidence that can highlight further the weaknesses in the management of the fixed charge notice system.”

SVP urges election candidates to commit to eliminating poverty 13:29
Social Democrats to ‘radically scale up’ number of new homes 13:07
Election 2020 outtakes: McHugh’s as tough as nails 13:00
Girl settles case over head getting trapped in electric gates for €20,000 12:52
Election 2020: ‘We all think the health service is a lost cause’ 12:26
SUBSCRIBER ONLY