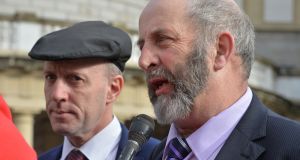 “God above is in charge of the weather and we here can’t do anything about it,” he told the Dáil during a debate on climate change on Wednesday.

Mr Healy-Rae, who was elected to the Dáil for the first time in February, said there had been patterns of climate change going back over centuries, “before there was ever a combustible engine working in this or any other countries.

“If we go back to the 11th and 12th centuries this country was roasted out of it and in the 15th and 16th centuries were were drowned out of it,” he said.

“In the 1740s, we had a famine in which we lost more than three million people because of two years of bad weather.”

Mr Healy-Rae said it has been suggested that climate change is the cause of flooding in the country. “But the flooding is due to the fact that rivers have not been cleaned out,” he said.

The Flesk river in Killarney and Glenflesk was cleaned out 35 years ago, he said. “And it was grand for about 20 years. Now it is in a desperate state again, but the view is that now climate change is the cause of flooding and we cannot get funding to clean rivers.”

The Shannon had not been cleaned out “since the English last cleaned it out. Perhaps if that river were cleaned there would not be half the flooding or the need for funding to be set aside to deal with flooding”.

He said they had to start with dealing with silted rivers, blocked with trees and “every other kind of obstruction. We must start there and not get carried away with the notion of addressing climate change by hoping to change the weather.”

He said that carbon tax was costing the community massive sums of money.

Independent Galway West TD Catherine Connolly referred to him as Deputy ‘Palin’ Healy-Rae, in reference to the former Alaskan governor and Republican nominee for vice-president, who disputed the existence of climate change.

Mr Ryan said nobody should touch any oil or gas reserves Ireland had, but should keep them where they are. He also argued the farming system was not exempt.

“If agricultural emissions increase because of our other plans, then we will have a fundamental problem… Will we say to the rest of the world following the Paris agreement that it should count Ireland out?”

He also criticised Fine Gael for having to be dragged into the process when climate change legislation was being put thorough the Dáil.

Fianna Fáil TD John Brassil acknowledged that his party “may not have the reputation of being environmentally friendly” but he said he would do everything he can to change that perception.

“While there are not many votes in it, unfortunately, it is our moral obligation and duty” to pursue the issue, he said.