While Kenny moves on jobs, debt remains a burden

Opinion: Fine Gael deputies believe their leader will get them re-elected 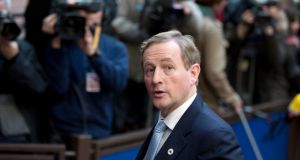 People from the west of Ireland speak clearly. You’ll notice it with Pat Rabbitte, Maire Geoghegan Quinn, and of course, Enda Kenny. You can hear every word he says. It’s just that you’re not always too sure what it means.

Time and again, we’ll take note of one of the Taoiseach’s long sentences, and then look at it and at one another and say: “This doesn’t mean anything.” But then, as one of the sages on the Dáil press gallery points out: “It’s not supposed to mean anything. That’s how you succeed in Irish politics.”

Kenny is a much nicer and straighter man than Bertie Ahern but he has developed a Bertie-like ability to waffle at Leaders’ Questions. There are other similarities, as Ahern knew quite well when he gave him the following advice during a Dáil confrontation about ethics in 2003: “Deputy Kenny, you and I are around a long time. The code of ethics here is that people get in here and try to stay in here.”

And that is the rock on which Kenny stands. His deputies now believe he will get them re-elected and that Fine Gael could, just could, win a second term in office for the first time ever. He is obsessed with elections and knows to the very day when the next election is – 104 weeks to the general election, as he announced unprompted to Áine Lawlor on RTÉ on Sunday.

Clear view
So does it matter to the party that he doesn’t seem to have any vision, any clear view of the Ireland he would like to help create, that he doesn’t seem confident enough of his own views to stand up and debate them with other party leaders on television, that the only speech of his which could be called inspiring was his brave attack on the Vatican for trying to frustrate attempts to investigate claims of child sex abuse?

“He doesn’t do the vision thing and he doesn’t pretend to,” said one deputy. “But you know we’ve had plenty of intellectual leaders in Fine Gael before now – Garret, Alan Dukes, John Bruton and not one of them got us re-elected. Enda brings managerialism and cuteness which have been lacking in Fine Gael and he has learned from experience. He has seen Fine Gael leaders make mistakes before and a light goes off in his head when he’s likely to do the same. Look out for the reshuffle. He won’t do what Garret did and end up with a big public mess over what brief Gemma Hussey got and what Barry Desmond got. It will be simple, minimalist.”

“He’s intelligent but it’s not an Irish Times sort of intelligence,” said another who has known him for years. “He can’t put a strong case together on the hoof. But he has a good memory. He reads the brief and remembers it. And he doesn’t agonise. He’ll take a decision and stick to it.”

Kenny’s good with people. He’ll shake hands with all the reception and floor staff on his way to do a TV interview. He shook hands and talked to almost every garda
on duty this weekend at the Fine Gael Ardfheis. But that “broth of a boy” image that pursued him when he came into office first has faded. The smile doesn’t come as readily now and he has shown how tough he can be. The way he quickly dispatched those who voted against the Protection of Life During Pregnancy Bill was a test of that.

Would Richard Bruton have done just as well? Maybe, though he’s not as decisive as Kenny has proved to be. It’s worth noting that almost all the more successful Fine Gael Ministers in Cabinet have come from Richard Bruton’s camp – Bruton himself, Simon Coveney, Leo Varadkar, not to mention junior minister Brian Hayes – while Kenny’s headaches have come from his own staunchest allies – Phil Hogan, James Reilly and Alan Shatter. He owes them nothing more now. He’ll move them on if necessary.

Stability
And what has he achieved in his three years? He and his Government have restored stability. People hate instability and so do investors. The Government has also been lucky. Mario Draghi’s European Central Bank has ensured that the markets have backed off the euro. Major European economies have started to show growth. As well as Ireland’s solid export performance we have begun to see a drop in unemployment to 12 per cent though much of that is accounted for by emigration. Against that is that failure to “fix the debt”. What has happened to Europe’s promise to separate bank and sovereign debt, from which we might expect a refund at least on the €32 billion of taxpayers’ money that went into AIB, Bank of Ireland and Permanent TSB?

More jobs will probably get him re-elected, but long term the debt is the issue on which Kenny will be judged. And he hasn’t delivered on it yet.