Flooding ‘not an issue’ at most bog rewetting sites, committee told 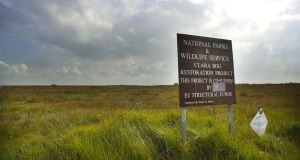 The first phase of the project will involve rewetting over 31,000 hectares in a move that will make the bogs act like a giant sponge that will sequester over 100 million tonnes of carbon dioxide into perpetuity. File image: Bryan O’Brien

Bord na Móna has given assurances it is a “responsible land owner” that will take great care not to flood adjacent farms during its ambitious project to rewet over 80 of its bogs.

The semi-state company announced it will cease all peat extraction and production this year and will instead focus on rewetting its vast holdings of bogland, mainly in the midlands.

The first phase of the project will involve rewetting over 31,000 hectares in a move that will make the bogs act like a giant sponge that will sequester over 100 million tonnes of carbon dioxide into perpetuity.

The bogs are rewetted mainly by removing drains. Farming organisations have expressed concern that the change will have a spillover effect and cause flooding to farmland adjacent to the bogs.

Representatives of Bord na Móna and the two main farming organisations appeared before the Oireachtas Committee on Agriculture on Tuesday to discuss the matter.

In his opening statement Ger Breen, head of land and habitat, at Bord na Móna said that it was a “responsible land owner” that had rehabilitated bogs quietly, effectively and with great care for adjoining neighbours.

He said the semi-state company had already rewetted 20,000 hectares of bog in recent years without controversy and said it would give every assurance to allay concerns over water levels.

Dr David Wilson, an environmental consultant with expertise in this area, said his experience of working on Bord na Móna rewetted cutaway bogs was that for the majority of those sites “flooding of adjacent land has not been an issue”.

He said in bogs close to the River Shannon where industrial extraction had taken place and there had been active pumping of drainage water, there was potential for flooding to be a problem when pumps were turned off. For most bogs, the marginal drains – at the perimeter of the bogs – were retained, preventing flooding outside the bog.

The issue of large bogs in the Shannon plains was raised by several members of the committee, including Matt Carthy (Sinn Féin), Carol Nolan (Independent) and Michael FitzMaurice (Independent).

Tim Cullinane of the Irish Farmers’ Association said land owners needed reasurrance and a guarantee from Bord na Móna regarding future ownership, as well as assurances that adjacent farms would not be flooded.

Similarly, Pat O’Brien of the Irish Creamery and Milk Suppliers Association sought assurances that privately-owned land adjacent to the Bord na Móna sites “will not be flooded or waterlogged”.

The Committee, chaired by Jackie Cahill (Fianna Fáil), also heard from several members who expressed concern about the future of turbary rights for families who cut their own turf banks on those bogs.

Dan Curely, representing regional game councils, criticised the plan for not being ambitious enough. He said, if left as they were, nature would move in and colonise the bogs with new growth.

He said these would not be proper bog plants but rather, through air borne seed, growth such as bog willow or birch.

“Why is the Minister [for Climate Change Eamon Ryan] not more ambitious in this rehabilitation project ? Bog plants, particularly heather, are the best pollinator plants - why not get these plants back on the bog?”

Coronavirus: 394 new cases and no further deaths reported in the State 17:52
Philomena Lee among five given leave to challenge mother and baby homes report 18:18
Louth man’s conviction for IRA membership ‘a miscarriage of justice’ 17:39
Bicycle-drawn hearse brings cycling advocate on his last journey 17:31
Covid-19 Vaccine Tracker: What's available in the Republic of Ireland and what else is coming? 16:53