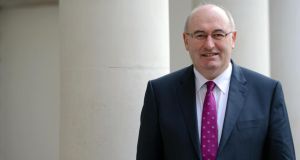 Minister for the Environment Phil Hogan: said the fire brigade expected to have the blaze under control by this evening. Photograph: Eric Luke/The Irish Times

Seventy-five firefighters were involved at one point in dealing with the fire at the Oxigen waste recycling plant in Ballymount, Dublin, Minister for the Environment Phil Hogan told the Dáil. He said the fire brigade expected to have the blaze under control by this evening.

The Minister also confirmed that three investigations were under way into the fire, which has raged at the site since early on Saturday morning.

The inquiries were being conducted by the Environmental Protection Agency (EPA), by gardaí and by the Fire Service.

Mr Hogan was responding to five TDs who raised concerns about the impact of the fire for residents across south Dublin and he pledged a full review of the licensing for such plants.

Sinn Féin environment spokesman Brian Stanley asked who was responsible for monitoring the operation of premises such as the Oxigen facility at Ballymount. “It’s a huge premises which seems now to have been an accident waiting to happen,” he said.

Sinn Féin Dublin South West TD Seán Crowe said the fire “should act as a wake-up call” as he expressed concern about the lack of regulation of a number of factories in the area which housed noxious chemicals and flammable liquids. “There is a time bomb waiting to go off.”

Fine Gael Dublin South Central TD Catherine Byrne called on the Minister to commission a review of all toxic waste storage plants licensed by the EPA and to “reassess their suitability for dealing with such waste in close proximity to residential areas”.

Her constituency colleague Independent TD Joan Collins said she thought her house was on fire on Saturday morning with the smell, which was “similar to what you’d get if plastic or rubber was burned”.

Labour Dublin South-Central TD Michael Conaghan also called for a rigorous review and said there had been reports of asbestos being stored at the site.

“I am sure this is hardly permissible.”

Fianna Fáil environment spokesman Barry Cowen said local residents were trapped in their homes and he said it was crucial that the cause of the fire was known and what could be done to prevent a recurrence.