Oireachtas hearings on proposed Bill have been intensive but not overheated 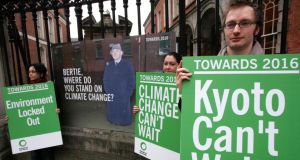 Oisín Coghlan (right): “The five climate Bills introduced in the Oireachtas since 2009 have had an 80 per cent emissions reduction target. The Government’s draft has none.” Photograph: Frank Miller

As the country experienced its most intense heatwave so far this century, the Oireachtas environment committee has been holding intensive hearings on the Government’s proposed climate-change Bill.

Despite the weather, and the fractious nature of the debate on the last government’s climate Bill, it has been a positive, serious and constructive engagement, modelled on the health committee hearings on X-case legislation earlier in the year.

The committee has had in-depth discussions with an array of stakeholders from the business, farming and environmental sectors as well as overseas aid agencies and economic and legal experts.

Many stakeholders felt the Bill’s expert advisory body is not independent enough. As currently proposed it cannot even publish its reports without government permission, and has a majority of ex-officio State officials. A high degree of consensus emerged that the Irish Fiscal Advisory Council was a good model for climate policy too. The fiscal council is independent in law, has no ex-officio members and has to publish its reports. While the Government can reject its recommendations it has to explain why to the Dáil. Encouragingly, Minister for the Environment Phil Hogan told the committee he was looking favourably at the fiscal council model.

He also agreed seven years is probably too long for each national low-carbon road map. Friends of the Earth and others argued that five year is the most a road map should last. Otherwise no government could be held accountable for the implementation of the action plan it adopted. We argue that each five-year national climate action plan should be adopted by the Dáil to increase its authority and generate as much cross-party support for action as possible.

National plan
The Irish Corporate Leaders on Climate Change, a group that includes Bord na Móna, Diageo and Vodafone, argued, as did others, that the national plan must come before the sectoral plans for energy, transport, agriculture and so on. This national-first approach “is more likely to yield a coherent, strategic approach, reducing costs and ensuring that all opportunities are fully exploited”, the group said.

The current proposal to let line departments develop sectoral plans first “creates a possibility that an Ireland Inc perspective may not be adequately represented in sectoral road maps”, it concluded.

The area of most controversy is whether the Bill should include targets for emissions reductions. On this question those of us proposing progressive, reforming legislation have already ceded much ground. When this debate began in 2007, Friends of the Earth and the Stop Climate Chaos coalition were pushing for 2020 targets that were tighter than our EU targets and included sectors that participate in the EU scheme.

Weak formulation
We argued that using taxpayers’ money to buy overseas credits to “offset” any overshoot of the targets should be ruled out. None of this will make the final Bill. Nor is there a 2030 target of the kind in the Fianna Fáil/Green Party Bill of 2010. The current draft simply requires ministers to “have regard to” our EU targets for 2020 and 2030 when drawing up action plans. The plans must have measures that “in the opinion of the government” are enough to achieve compliance. This weak formulation should be strengthened.

What remains is the issue of a 2050 target. The five climate Bills introduced in the Oireachtas since 2009 have had an 80 per cent reduction target. The Government’s draft has none.

The rationale for a target is simple. It provides the long-term certainty about the direction of government policy that business and households need to invest in the transition to a low-carbon economy and society. It provides a benchmark against which to measure progress. The target drives the rest of the policy cycle. It provides a legal impetus for timely and adequate action to cut emissions. Ultimately it will be a driver of the innovation in public policy, private enterprise and personal behaviour we need “to achieve transition to a low carbon, climate resilient” Ireland: the stated objective of the Bill.

Some worry that an 80 per cent target would tie our hands in long-term negotiations inside the EU. But EU leaders have already agreed that Europe will have to achieve 80-95 per cent cuts, so we would simply be showing we are ready to come to the table. Moreover, the Government could include a target in the Bill and ask the new advisory council to propose the level.

Once the Oireachtas committee concludes its deliberations and publishes its report, the ball will be back in the Cabinet’s court to decide the shape of the final Bill, which is due in the Dáil before the end of the year.

Oisín Coghlan is director of Friends of the Earth. The submissions to the Oireachtas hearings are online at: http://bit.ly/1brqFLP