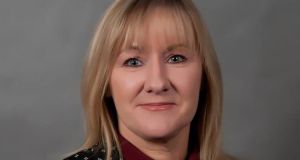 Imelda Munster: asked the Taoiseach to make a commitment to publish an audit under way at St John of God centre at Drumcar, Co Louth

The taking of money from the personal bank accounts of residents at a facility for people with intellectual disability has been highlighted in the Dáil.

Ms Munster said the publication of the audit was necessary in light of the financial misappropriation at the centre. She said “residents had money taken from their personal bank accounts to purchase medical supplies that St John of God should have purchased”.

“One resident also had his own personal bank account raided to purchase cutlery, soft furnishings and a fireplace for the St John of God.”

The Louth TD said the audit should be published in the interests of transparency and given the apparent lack of scrutiny by the HSE despite millions of euro in public money being paid into this service.

Mr Kenny told her “it appears to be more than borrowing from patients’ personal bank accounts if what Deputy Munster is saying is true”.

The Taoiseach said Minister for Health Simon Harris would deal with the issue when he received the report and “when he has had time to reflect on it”. He would ask him to respond to Ms Munster.

“Clearly we cannot have a situation where patients’ private bank accounts are raided to pay for public property in any facility. That is a crime.”

The Drumcar facility has been the focus of controversy for a number of years following numerous reports which have highlighted major compliance issues in the housing and care of residents on the campus.

The Health Information and Quality Authority (Hiqa) has deemed a number of units at the St John of God campus as not fit for purpose.