Taoiseach’s priority must be to set date for abortion referendum

‘No women should be denied services in Ireland,’ Seanad told 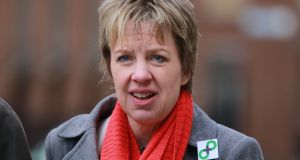 Ivana Bacik said the referendum on the repeal of the eighth amendment on abortion needed to be held by the end of February or early March next year. Photograph: Nick Bradshaw

The first priority of the new Taoiseach must be to set a date for a referendum on the repeal of the eighth amendment on abortion, the Seanad has heard.

Labour Seanad leader Ivana Bacik said the referendum needed to be held by the end of February or early March next year.

Once a date had been set, the members of the newly established Oireachtas committee on the issue could then discuss what followed and “what replaces the amendment in terms of legislative provision for abortion”.

Ms Bacik told the Seanad “that appalling case alone would be enough to warrant the holding of an urgent referendum on repeal”.

She said “successive generations of Irish women, my own included, have been failed over decades. It is time we stood up and said that no more children be detained and no more women be denied the compassionate services they require here in Ireland.”

Independent Senator Lynn Ruane also referred to the “horrifying case” of the young teenage girl who was sectioned and detained in a psychiatric unit under the Mental Health Act for requesting an abortion last year.

Ms Ruane said the girl and her mother thought they were going to Dublin for an abortion when she was sectioned instead. “This is nothing short of institutional coercion of a vulnerable young woman.”

The Trinity College Senator said the teenager lost her freedom and her right to bodily integrity. “This shows what a complete failure the Protection of Life during Pregnancy Act 2013 has been in respecting the human rights of women in this country.”

She said the girl qualified for a termination under this legislation and was denied one.

“It is truly extraordinary, given recent media reports, that we should be so naive as to think people will ultimately do the right thing in such circumstances.”

Ms Ruane quoted comments by then minister for health James Reilly who said during debate on the Protection of Life During Pregnancy Bill that “the very notion that one could section a woman who is expressing suicidal ideation but is not depressed to keep her confined for the duration of her pregnancy would be utter anathema and would not be tolerated or countenanced”.

Dr Reilly, now a Fine Gael Senator, told the Seanad he stood over his remarks. He said he had made it clear he wanted an investigation into the circumstances “that led to a citizen of this country heading to Dublin in the belief that she was going for a procedure only to find herself incarcerated”.

He added: “That is utterly unacceptable and I want the truth of what precisely happened exposed. Laws and protocols are in place to prevent that from happening.”

Fianna Fáil Seanad leader Catherine Ardagh said it was a “frightening thought for any woman who is pregnant and will experience any kind of difficulty during her pregnancy.

“It is meant to be a joyous time, but her life is at risk, not by her own hands but by those of the State. It is incredible. One would not have read about this in a newspaper in Ireland in the 1950s, but one can today.”

Ms Ardagh added her voice to calls for an independent inquiry into the case. “It is clear that the legislation is flawed and that women deserve a lot better.”