Martin tells Varadkar not to be ‘petty, silly or idiotic’ in clashes over Dunkettle Interchange 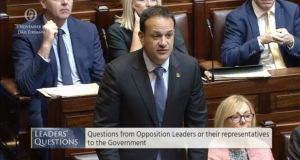 Taoiseach Leo Varadkar said he was “always amused and bemused that Deputy Martin likes to accuse me of being partisan and personal”. File photograph: PA Wire

Taoiseach Leo Varadkar has compared Fianna Fáil leader Micheál Martin to a secretly sinning priest during tetchy exchanges on questions about the cost of capital projects.

Mr Martin and the Taoiseach clashed after he told Mr Varadkar not to become “petty, silly or idiotic”, during ill-tempered exchanges about overspending on significant capital projects.

Fianna Fail, which supports the Government in a confidence and supply arrangement, has consistently raised concerns about delays in other projects because of the overruns on the national children’s hospital and the national broadband plan.

Mr Martin had earlier highlighted delays in the upgrading of the Dunkettle interchange on the outskirts of Cork and returned to it during Taoiseach’s Questions.

“It was meant to go to construction, according to yourselves in early 2019,” he said to Mr Varadkar.

To be honest Elaine, I think this reflects more on the Taoiseach than anyone else. https://t.co/BjFH1qC1dk

“[T]he rumour is that the costs are way ahead of the €115million and I am hearing those rumours. There is absolutely nothing happening on the site and people are mystified as to what is actually going on.”

Mr Martin added: “And with the greatest respect Taoiseach, people are fed up of hearing about Project 2040 and 2030 and ‘we are going to do this and do that’.

“There are many projects announced for the Cork region and the joke around town is ‘sure we can’t get past the Dunkettle roundabout which was to happen years ago’.”

“Some of the costs in the plan were little better than thinking of a number and hoping to be right,” the Cork South-Central TD said.

And he told Mr Varadkar “not to become petty, silly or idiotic” by suggesting Fianna Fáil were against projects when they raised questions about costs.

And the Taoiseach in turn hit out at Mr Martin.

He added: “He kind of reminds me of one of those parish priests who preaches from the altar telling us how to avoid sin while secretly going behind the altar and engaging in any amount of sin himself.”