‘Sinkholes’ in Corrib project not dangerous 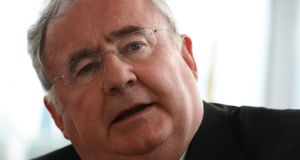 Minister for Natural Resources Pat Rabbitte has told the Dáil that “sinkholes” seen at the Corrib gas project in north Mayo were “depressions” from air releases during maintenance work. “I assure residents that there is no danger involved.”

He said Corrib gas developers had notified his department about depressions in Sruwaddacon Bay, where the final section of the pipeline was being laid. These depressions “are caused by air escaping during tunnel boring machine ‘intervention’ maintenance”.

Mr Rabbitte said “these depressions were not sinkholes”.

Sinn Féin’s Michael Colreavy said the Minister referred to depressions but locals called them sinkholes and “they have erected warning signs along the tunnelling route relating to the final section of the Corrib pipeline” because they regarded them as a serious risk.

The Sligo-North Leitrim TD asked, regardless of whether it was a sinkhole or depression, “was a phenomenon of this nature predicted in the environmental impact statement submitted during the planning process”.

Mr Rabbitte said it had been included in the environmental impact statement .