Wallace accuses Minister of being ‘weak bordering on cowardly’ 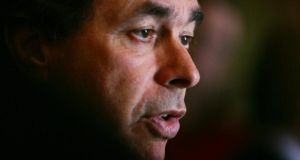 Minister for Justice Alan Shatter said the gardaí as a group was under continuous attack in the Dáil. Photograph: Bryan O’Brie

Minister for Justice Alan Shatter has rejected claims by Independent TD Mick Wallace that he has been “weak and bordering on cowardly” in holding gardaí to account in their policies and procedures.

Mr Shatter insisted he expected “members of An Garda Síochána to behave appropriately and to do their duty without fear or favour”.

He said: “Where there are issues that need to be dealt with they will be addressed, but unlike the deputy, I do not labour under the illusion that the gardaí as a group do no public good.”

Mr Shatter said gardaí as a group were under continuous attack in the Dáil, with no recognition given for the important work they did in combating subversion, dealing with criminal gangs, providing community protection and engaging in crime investigation.

The sharp exchanges developed during justice question time in the Dáil when Mr Wallace raised the general practices, policies and procedures of the Garda in relation to Corrib gas.

‘Silence’
He also referred to other cases and claimed there was a “defensive approach” by gardaí and a “blue wall of silence” with “automatic opposition to any kind of transparency”, following the refusal of the Garda Commissioner to provide files in the Ian Bailey civil cases against the State for wrongful arrest.

He also highlighted the commissioner’s actions in seeking the files held by the Public Accounts Committee relating to the cancellation of fixed charge notices. He alleged the Garda had been “over-centralised and politicised”.

Mr Wallace said: “It is within the remit of the Minister to check that tendency and to hold the Garda to account. Sadly, his track record to date has been weak and bordering on cowardly.”

Complaints
He said 111 complaints were made against gardaí in 2007 and 2008 in relation to Corrib gas but no charges were brought. He claimed: “It is clear there is a systemic problem in terms of Garda policy and procedure.”

The Wexford TD called on the Minister to order a Garda Síochána Ombudsman Commission investigation under section 106 of the Garda Síochána Act into the issues around the Corrib gas project. He said, “that would go some way to redressing that imbalance” because the commission’s hands were tied unless Mr Shatter consented to such an investigation and the UN rapporteur had criticised this in her report on the controversy.

Dismissing his claims Mr Shatter said he was looking forward to the day Mr Wallace would tell the House what work of the Garda Síochána he supported.

Mr Shatter said the Garda’s role in relation to Corrib gas was to maintain law and order, but protesters disrupted and sabotaged the development and damaged property. “Such action cannot be tolerated and the Garda presence is there to prevent it.”