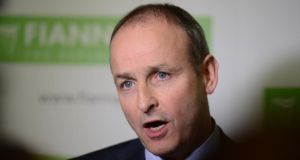 
The Taoiseach said the Minister for Justice had not told him in advance that he was going to release information about TD Mick Wallace on RTÉ’s Prime Time programme.

“The answer is no,” said Enda Kenny. “The Minister did not brief me or inform me on that matter.”

Mr Kenny said Alan Shatter made available information that was relevant in the case being made by Mr Wallace relating to discretion being used or not being used relating to penalty points. “During the debate I understand that Deputy Wallace could not recall that the incident had occurred,” Mr Kenny added. “He clarified that fact the following day.”

“He publicly set very rigorous standards in this area some years back when he said such behaviour, in disclosing Garda information publicly by any Minister in any government, was entirely unacceptable. The Taoiseach has compounded the problem by endorsing the Minister’s misbehaviour.”

Mr Martin asked how private information on an incident which occurred over a year ago found its way to the Minister last week. “Are there files in existence in which such information is kept and stored for use eventually?”

Mr Kenny said he did not agree that the Minister wished to undermine Mr Wallace, adding he had not said Mr Wallace had done anything wrong.

Mr Martin said private information had been supplied to the Minister by the Garda and used in a debate to undermine a political opponent. There was a background of threatening innuendo that “if you question us too much, we will get you”.

That was the import of what the Minister was saying and that made it distasteful.

Mr Kenny said it was outrageous for Mr Martin to claim or insinuate that the Minister was going around collecting files on individuals or members of the House of all parties and none.

Sinn Féin leader Gerry Adams said the Minister’s actions in using information to smear a political opponent raised serious questions about his suitability for office because it was an abuse of power.

He said there should be a truly independent investigation into the penalty points debacle, including the Minister’s handling of the whole affair.

Independent TD John Halligan, on behalf of the technical group, said when an allegation was made against any citizen, information relating to it was between the citizen, possibly the DPP, the Garda and maybe the offended individual. An offence was committed if a person was charged by a garda.

“No offence was committed because he was not charged with any offence. Does it give any Minister the right to go on public television and to name an individual?”