Proposals to allow all Irish passport holders to vote will increase electorate by 650,000 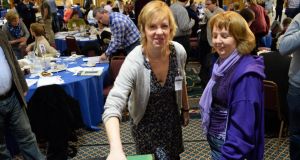 The authors of a report on Seanad reform expect their work to be taken seriously by the Government and all political parties, chairman of the group Dr Maurice Manning has told the Upper House.

The former Seanad leader said the working group on Upper House reform was “given a job to do in the expectation that a reasonable report would lead to change. We have done our job seriously.”

He said there could be improvements on their work “but what we expect is that our seriousness will be matched by that of the Government and the other parties”.

Dr Manning said there had been indications from Government and other parties that the report was being taken seriously and he appealed to Senators to “seize the opportunity” for reform.

He said their “only objective was to produce the strongest possible Seanad”. The working group has produced a draft Bill of their reforms which they will formally launch later this week and which they hoped could be in place by the end of the year.

The report’s main recommendations include extending the vote in Seanad elections to all citizens of the State and of Northern Ireland and to all Irish passport holders worldwide.

It also recommends that citizens directly elect 30 Senators and that the number of members elected by councillors it reduced from 43 to 13 and a separate constituency for the six university seats on a one person vote only. Their proposals also include opening up the system to include a wider range of nominating bodies.

Dr Manning stressed that they were not “re-inventing the wheel” and they were influenced by a report in 1995 by Jim O’Keeffe and in 2004 by Mary O’Rourke and by the Bills drawn up by Independent Senators Feargal Quinn, Katherine Zappone and John Crown.

A number of Senators in the debate took issue with the extension of voting rights to all citizens and passport holders globally and questioned the costs.

Former senator Joe O’Toole, a member of the working group, said there was “no one way” to articulate democracy. In Canada all Senators were nominated while in France and Germany among other countries all Senators were elected in directly as is currently the system for 43 Senators. In Australia all members are elected to the Upper House by popular vote.

He said that in New Zealand with a similar population to Ireland and a system like they were advocating, the last election cost €7 million. He believed a maximum of about 790,000 additional voters would be included on the register if their system was implemented.

He said about 65,000 passports are issued to Irish citizens abroad annually and he estimated that 650,000 of current passport holders who live abroad would register to vote.

Feargal Quinn (Ind) said there “comes a time when navel gazing and intellectualising must end and action must be taken”.

He was worried that things took so long to happen.They had had two referendums on the Seanad and Mr Quinn asked: “Must the cock crow a third time for anything to happen?”

He added that the Taoiseach and his Government were now uniquely positioned to implement real and substantial Seanad reform.

Seanad leader Maurice Cummins (FG) said “it’s my fervent wish that this will be the last report on Seanad reform”, to a resounding chorus of “hear hear”.

He was pleased the report restated the Seanad’s primary role is in the scrutiny of, debate on and amendment of legislation.

Denis O’Donovan (FF)opposed reducing the number of Senators elected by councillors from 43 to 13 as “diminishing again the powers of our councils”. Mr O’Donovan said that the most successful economy in Europe - Germany - had an Upper House elected in a system very similar to Ireland’s and “they’re not about to change that”.

Labour’s Denis Landy asked why the working group had picked 13 as the number of Senators to be elected by councillors. Dr Manning told him the vast majority of the 69 submissions they received “advocated the abolition of all election through votes by councillors. We thought 13 was a fair balance”.

Labour Seanad leader Ivana Bacik noted that just eight of the 69 submissions to the working group who prepared the report, were from current or former Senators.

She welcomed the proposal for online registration of voters and said the “Constitution requires that ballot papers must be returned by post but there is no deterrent in downloading forms online”.

Ms Bacik also welcomed the holding of the Seanad election on the same day as the Dáil election, which she believed would prevent the Upper House becoming a mini Dáil.

Independent Katherine Zappone highlighted the slow pace of reform. She said the referendum on Seanad abolition had taken place 18 months ago and they now had this report “but we do not yet have an Act or even a Bill to implement the result of the 1979 referendum”, to extend the franchise to all third level students.

She welcomed the publication of draft legislation as a significant achievement and suggested that the working group should have included a mechanism for some form of gender equality in election to panels.

Independent David Norris said it was something of a disappointment that less than a third of the members of the House were in place for the debate and he also criticised the lack of media presence.

He was also “really irritated” by the reference to elitism. “It is always attached to the university seats, for which there are 150,000 voters, 150 times the number of voters for the 43 panels and 150,000 times the number for the Taoiseach’s 11 nominees.”

Fine Gael whip Paul Coghlan said there was “something very strange about having so many electors overseas and outside the jurisdiction. That somehow will not gel and I raise a serious question about the matter.

Paschal Mooney (FF) regretted the Bill did not include the retention of the title of Senator, for life, as they did in the US, since it was so difficult to get into the Seanad in the first place. He also believed there was a “naivety about the timetable for implementation”.

He questioned the proposal to increase the range of nominating bodies. He said he conducted a survey of nominating bodies before the Seanad referendum and one of them, the Asti, had said they would not get involved in the Seanad referendum because they were not a political organisation. He asked what was the point then of them having a nomination. He said they “saw themselves as somehow apart from that grubby little business called politics”.

Taoiseach’s nominee Fiach MacConghail said there was “absolutely nothing radical in this report at all. It all feels familiar.” But he added that he felt he could a lot more on the Abbey stage than in the Seanad, in terms of reform.

Mr MacConghail said the Government had promised reform for five years but “they have yet to install an electoral commission. I have a great feeling around both frustration around any sense of reform.”

Taoiseach’s nominee Jillian van Turnhout said she was not yet convinced about universal suffrage. She pointed out that some countries did not permit dual citizenship. She said her husband, who is Dutch, could still vote in the Netherlands but had lived in Ireland for 17 years and did not vote because he was not up to date with all the issues.

Jim d’Arcy (FG) a Taoiseach’s nominee, said it was great to be in the Seanad without having to be elected and he believed the proposals for change were quite radical.

David Cullinane (SF) said there should be no Taoiseach’s nominees that every member should be elected. He said he hoped if there was a franchise for the North that Unionists would take the opportunity to vote.

Hildegarde Naughten (FG) said it was a monumental change that passports holders should be allowed to vote and a very positive proposal.

Mark Daly (FF) said 120 of 196 countries in the world allowed their citizens overseas to vote.

Jim Walshe (FF) said including all Irish passports throughout the world would create problems and be very impractical. “People living outside the jurisdiction would have more of an influence than those living in the State.”

NUI Senator John Crown said there were “too many politicians whose sole focus is on constituency issues. The principle should be that every seat of this House should be up for election by every citizen.”

Independent Gerard Craughwell said the Seanad had failed to live up to its promise and “the panel electoral system has been hijacked by political parties”.

He said there had been examples of Senators who were rejected by the electorate in both Dáil and Seanad elections and were still nominated to the Upper House by the Taoiseach of the day. He asked how that served democracy.