Members of the AAA-PBP group of TDs have worn sweaters displaying the slogan 'REPEAL' in the Dáil chamber as Dublin West TD Ruth Coppinger raised the issue of abortion during leaders’ questions. 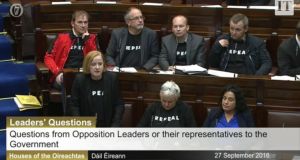 Abortion is not a black-and- white issue, Taoiseach Enda Kenny has said as the issue was raised in the Dáil in the wake of the demonstration in Dublin at the weekend.

Mr Kenny referred to the wearing of sweatshirts by the six members of Anti-Austerity Alliance-People Before Profit with the message “Repeal” during Leaders’ Questions.

Dublin West TD Ruth Coppinger had called on the Taoiseach to “repeal, not amend the Eighth Amendment” to the Constitution on abortion, giving equal value to the life of the unborn and that of the mother.

The six members of the group arrived into the chamber with the men wearing jackets over the sweatshirts.

Mr Kenny said he fully respected Ms Coppinger’s view but “it is not a black-and-white situation. The T-shirts may be black and have white writing but this is about people and people have different views”.

Ms Coppinger said 165,000 women had had to travel out of the State for an abortion in the Taoiseach’s 41 years in the Dáil. She asked him to accept “the Constitution is not the place to decide these issues and ultimately the church and the State have to stay out of personal decisions”.

Mr Kenny said he had listened to many tragic stories and that was why it was appropriate for the citizens’ assembly to tease out the issues.

“It is in everybody’s interest that there be a sensitive, rational and comprehensive discussion about this,” he said. The assembly will hold its first meeting on October 15th.

The wearing of clothing or emblems displaying party political messages in the Dáil runs counter to standing orders.

After question time, officials approached Ms Coppinger on the issue and spoke to two TDs who were leaving.

Fine Gael TD Ciarán Cannon questioned the wearing of such sweaters and said there was an issue about clothing and emblems.

He said that some time ago he had a group of schoolchildren in Leinster House who were wearing T-shirts with the word CoderDojo on them, a reference to a movement of community-based programming clubs for young people.

The children had to leave the grounds and remove their T-shirts before being allowed back into Leinster House.

Mr Cannon asked whether, in light of the wearing of “such wearing of clothing or emblems”, any action would be taken.

Ceann Comhairle Sean Ó Fearghaíl said the a code of parliamentary standards had been adopted in 2010 that emblems of a party political nature should not be worn.

Mr Ó Fearghaíl said the matter would be discussed by the business committee and the committee on procedure and privileges.

During question time, Ms Coppinger referred to a rally in Dublin on Saturday when an estimated 25,000 people marched to call for the repeal of the Eighth Amendment to the Constitution, which places the life of the unborn on an equal footing with that of the mother.

She said Minister for Children Katherine Zappone had said “ ‘we might need something to replace the Eighth Amendment in our Constitution’ - and I want to ask if you agree with that and if so, why?”

The Socialist Party TD asked why, after the “tragedies and follies of equating a woman with a foetus, would you put something else there policing women’s bodies?”

Mr Kenny said they were holding the citizens’ assembly to allow people have their say.

“Everyone can have personal opinions about this,” he said. It was a Government decision endorsed by the Oireachtas to establish the assembly.

“I admire the courage of those 99 who have stepped forward to say ‘I will participate in this discussion’,” he said. “Not an easy thing for many of them to do given the nature of the divisive response” to the issue.

The Taoiseach stressed that “there is nothing being cooked up here. It’s a very straightforward democratic exercise.”