Rejection of Seanad referendum would lead to constitutional immobilism

No coherent proposal for reform has been put forward 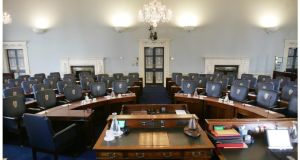 ’The weakest institution by far under the Constitution has been the Seanad.’ Photograph: Alan Betson

In his 1943 memoir of William Butler Yeats, Oliver St John Gogarty, himself a former member of the Senate of the Irish Free State, wrote in relation to Yeats’s appointment as a senator:

“One day he told me when he was travelling by train to Galway, a countryman finding a door in the corridor locked, turned to him and said ‘Will you open it, Senator?’ As if all things were possible to a man in an exalted position. There was a little hint of slyness in his detection of humorous things of this sort.”

Yeats’s anecdote provides an apt epigraph to the current debate on the Seanad.

I am a resolute abolitionist. When the proposal was first advocated, I was a little startled, but could see its merit. I have since become ever more firmly persuaded that taking the Seanad out of the constitutional scheme is the right course. I support abolition as the first piece of institutional self-fashioning under the 1937 Constitution in the history of the state, based on the course of Irish politics as it has been experienced. It is radical and it is prudent. The case for eliminating the Seanad I believe to be compelling in political, historical and constitutional terms.

The weakest institution by far under the Constitution has been the Seanad. It is not amenable to reform that would not recast radically the Irish constitutional order and throw up a whole series of new problems. No coherent proposal for reform of the Seanad has been put forward. It is exceedingly doubtful that it is possible to formulate one.

Universal suffrage
It is casually suggested that it could be elected on universal suffrage. If it is to be elected in the same manner as the Dáil, the rationale for the Seanad’s existence as some sort of notionally politically independent and distinct specialist body vanishes. If elected by universal suffrage the composition of the Seanad would largely replicate that of the Dáil. If the Seanad nevertheless saw fit – and political institutions have their own momentum – to strike out in a direction that conflicts with that of the Dáil, the stage would be set for a collision between two houses of parliament enjoying the same democratic mandate. The country could find itself confronted by a constitutional crisis.

This is precisely the stubbornly unyielding dilemma that has stymied reform of the House of Lords in the United Kingdom, but it is skated over by advocates of retention, who say they favour a Seanad elected by universal suffrage.

Reform of the Seanad is not an option that arises. The referendum proposal – abolition or retention – is not a loaded choice. It gives expression to a reality. Aside from the unreality of Seanad reform there is no consensus whatever around it. We cannot invite voters to write their own scheme for Seanad reform on the back of the ballot paper.

The Seanad has become obsolete. Representatively there is no reason to entrench minority, vocational or university representation, and obvious grounds of objection. Functionally there is no necessity for a second chamber. The burgeoning of public discussion in media new and old has added a further whiff of archaism. Civil society has many modes of expression. The idea that the Seanad in some way leads or is even a significant component of public debate in civil society is ludicrous.

Refashioning the system
Abolition is the necessary first step in refashioning the Irish legislative system. It represents a beginning rather than an end. Putting the proposal has been constructive in itself in giving an impetus to public debate. What that debate has not thrown up is a convincing rationale for retention. Advocates of retention in effect invite the public to withhold assent from the proposal until such time as the government advances proposals that address every infirmity of the Irish legislative process. This is not very constructive. Predictably they give the government zero credit for the innovations in the legislative process that have been proposed.

It is widely suggested that a rejection of the proposal would damage the authority of the Government. I don’t believe that defeat of the proposal would injure a government that had the resolve to put it up; either outcome may in fact have adverse consequences for the credibility of those who opposed the referendum proposal on opportunistic grounds, for reasons of imagined party advantage or ulterior ideological purposes.

Redundant institution
The real loser if the proposal is defeated would be the country, and not just in being lumbered with a redundant and objectively unreformable institution. Rejection would have a legacy of deadening conservatism and lead to a dismal sense of constitutional immobilism. The paralysing conventional wisdom will be that any government that puts up serious proposals for the amendment of the constitution that bear on how politics in Ireland is practised will be courting certain defeat. We will be left with a constitution that has proved legally dynamic, but which is institutionally frozen at 1937.

It is in the nature of proposals for constitutional change that they throw up confederacies of opposites. Fintan O’Toole has rallied to the defence of Seanad. However, with the monotonal acridity that marks his writing on post-crash Irish politics he also pronounces that “the Seanad stinks”. He is perhaps attempting to keep himself apart from Michael McDowell and the leadership of Fianna Fáil. The Seanad’s sudden friends are a rum lot.

Of course we don’t know if Yeats wrestled with the handle of the carriage door, or if it yielded to the senatorial touch.

Frank Callanan is a senior counsel and chairman of the trustees of Fine Gael.