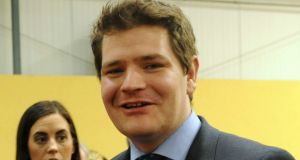 Peter Burke emerged as a new Fine Gael TD in Longford-Westmeath while his two sitting colleagues, James Bannon and Gabrielle McFadden, lost their Dáil seats. Burke, who is a native of Mullingar, was narrowly beaten at the party selection convention but added to the ticket last November. Burke, a county councillor since 2009, grew up on a farm near Mullingar. Educated at St Mary’s CBS primary and secondary school in Mullingar, he graduated with a commerce degree from NUI Galway in 2004. For the past 10 years he worked as a chartered accountant with Stephens Cooke in Mullingar. He is married with one child.