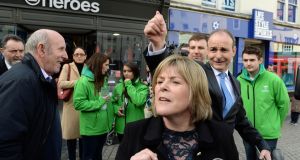 Fianna Fáil newcomer Mary Butler has come from nowhere to being elected in Waterford in her first outing in a general election. From Portlaw, Butler is a married mother of three. She worked in retail in the local family business and then part-time in a jewellery shop in Waterford owned by her sister. She was elected to Comeragh district with 639 votes in the local elections in 2014 and beat off stiff competition from three male rivals to secure the Fianna Fáil nomination for the general election. She comes has campaigned for the party for over 25 years. Active in community groups, she is the chairwoman of the local camogie club and tidy town committee in Portlaw. She campaigned largely on local issues, in which the campaign for 24/7 cardiac services at Waterford University Hospital loomed large. In the Dáil, she says she hopes to focus on health and housing issues.