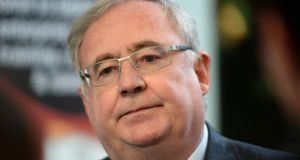 Former minister Pat Rabbitte told the Dáil the legislation ‘will make it an offence for a person to send or cause to be sent by means of public electronic communications network’. File photograph: Dara Mac Dónaill / The Irish Times

Mr Rabbitte told the Dáil the legislation “will make it an offence for a person to send or cause to be sent by means of public electronic communications network a message or other matter that is grossly offensive or menacing in character”.

He said the Public Electronic Communications Networks (Improper Use) Bill would close a legal loophole.

“It will support victims of abuse, and it will strengthen the capacity of the Garda Síochána to deal with reports of offences,” Mr Rabbitte said.

An internet content advisory group last year recommended that all electronic communications be included in the 2007 Act to “prohibit the sending of messages which are grossly offensive, indecent, obscene or menacing”.

1 Larger retail stores to reopen on Monday ahead of schedule
2 Donald Trump is in trouble, and that could spell very bad news
3 O’Doherty and Waters ordered to pay legal costs of case against State over Covid-19 laws
4 Taoiseach says €350 pandemic payment to be cut for some part-time workers
5 Madeleine McCann case: ‘We assume the girl is dead’, German prosecutors say
Real news has value SUBSCRIBE