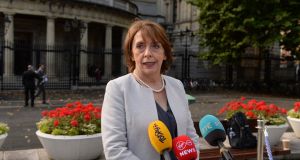 Social Democrats TD Róisín Shortall, who championed the parental leave legislation in the Dáil, said it was a great relief to see it pass. Photograph: Dara Mac Donaill/The Irish Times.

The Oireachtas has passed a private member’s Bill to increase the entitlement to unpaid parental leave from 18 to 26 weeks in a rare all-party agreement.

The legislation, introduced three years ago by the Social Democrats, will also increase the qualifying age of children in the scheme from eight to 12, which is in line with EU proposals.

The extra leave will be introduced over two years with an increase to 22 weeks from September and to 26 weeks in September of next year.

All parties are in favour of the legislation and the Dáil on Tuesday night passed amendments from the Seanad to the Parental Leave (Amendment) Bill.

Minister of State for Equality David Stanton described the legislation as “an example of new politics working”.

Social Democrats TD Róisín Shortall, who championed the legislation in the Dáil, said it was a “great relief” to see it passed. She said there was interest in the legislation as parents were under excessive pressure and “put to the pin of their collar to get by and keep the show on the road”.

The Dublin North-West TD said “parents have told stories of having to get up at 4 am and the unsustainability of doing that.

“Parents are coping with children with special needs. Others, because they are working long hours, rarely get to spend quality time or quantities of time with their children.”

Fianna Fáil justice spokesman Jim O’Callaghan said all parties recognised it was a very important piece of legislation which would have significant benefits for parents.

Sinn Féin justice spokesman Donnchadh Ó Laoghaire said it was challenging to raise a child in a society increasingly focused on work and schemes like this were vitally important.