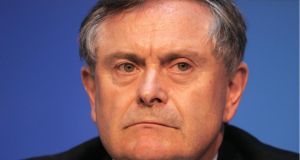 The Bill makes clear that if Brendan Howlin or his ministerial successors want to suppress anything they may do just that. Photographer: Dara Mac Dónaill

Minister for Public Expenditure and Reform Brendan Howlin has published a new Freedom of Information Bill, which proclaims its purpose to be “to enable members of the public to obtain access, to the greatest extent possible consistent with the public interest and the right to privacy, to information in the possession of public bodies [and] other bodies in receipt of State funding”. It states this is necessary “to ensure accountability and the promotion of the principle of transparency in government and public affairs”.

It is nothing of the sort. Although it is a modest improvement on the 2003 Fianna Fáil-inspired evisceration of the original 1997 Act, it is a product of a bureaucratic mindset that wants to keep secret as much as possible while, of course, professing openness, transparency and the rest.

The information concerned is owned by Irish citizens. Every scrap of it should be made public except that which would infringe individual privacy; or compromise the security of the State and its people; and which, in exceptional circumstances, would be commercially sensitive.

Suppression
Instead of establishing at the beginning the public’s entitlement to all information, with some exceptions, that would help keep Ministers as well as all public bodies and agencies accountable, this Bill makes clear that if Brendan Howlin or his ministerial successors want to suppress anything at all they may do just that. It states (section 6.3.a) that the Minister may by order declare any public body or any other body covered by it exempt from freedom of information (FOI). A later section gives the Minister further powers to declare any record exempt from disclosure if asked to do so (section 34.1.a).

Section after section of the Bill is devoted to curtailing the entitlement of the information’s owners, Irish citizens, to access to that information.

A request may be refused if the person handling it thinks that it involves too much bother (section 15.1.c); or that it is frivolous or vexatious (section 15.1.g); or that effort might be required to extract the information (section 17.4.a). Another provision states that no agency covered by the Bill will be required “to take any steps by way of manipulation, analysis, compilation or other processing of any such records, or any data contained in records, held by the body” (section 17.4.d). Why?

The fees to be charged will be lower than now apply but will still, in my view, be prohibitive. For an internal review of a decision to refuse a FOI request the fee will be €30. A fee of €75 for an appeal to the Information Commissioner will apply. But it seems from section 27 that the fees to be charged for the retrieval of information might be enormous – potentially thousands of euro. Irish citizens will have to pay, in certain instances, huge sums of money for documents that they own.

Rafts of material can be deemed exempt from disclosure. For instance, an application for a record that has been or is proposed to be submitted to government by any minister can be refused. Why?

We can be refused access to documents if, in the opinion of an official dealing with FOI requests, this “could reasonably be expected to have a serious, adverse effect on the ability of the Government to manage the national economy or on the financial interests of the State” (section 40.1.a). But isn’t it likely that precisely such documents should be disclosed to the sovereign Irish people?

Documents disclosing the liabilities of the State and public bodies can also be protected (section 40.2.q). By what reasoning should such documents be withheld from the public?

The Bill will not apply to the courts (section 42). Why? These are the people’s courts, so why should we not know what is going on in the courts, even behind the scenes in the courts?

Why, for instance, is there not a public entitlement to every single document that is “opened” (ie disclosed) in court, unless the hearing is in camera?

Also withheld are documents given by a body covered by this Bill to the Government or a Minister for use in the Houses of the Oireachtas (section 42.j). Why?

Brendan Howlin specifically promised that the National Asset Management Agency – which since it was established in 2009 has operated largely in secret, with huge powers over tens of billions of euro of assets now owned by the Irish public – would be covered by this Bill. But schedule 1 (n) of the Bill exempts almost all documents of interest that Nama possesses: those in relation to companies, funds or any other entities in which Nama has invested or could potentially invest; in relation to purchasers or potential purchasers of any asset or loan or of any other asset securing loans held or managed by Nama; and in relation to sellers of assets acquired or which may be acquired by Nama or by any company, fund or other entity in which Nama is an investor.

Then there is a list of agencies that are excluded, including An Post, Dublin Bus, CIÉ, ESB, the National Oil Reserves Agency, Tourism Ireland and VHI.