Nama rejects allegation the sale of Project Eagle was ‘corrupt’ 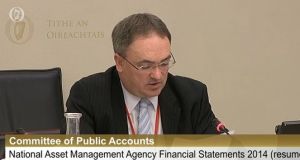 Chairman of the National Asset Management Agency (Nama) Frank Daly has told the Public Accounts Committee he rejected any allegation that the sale of Project Eagle was “corrupt”.

The agency is before the Public Accounts Committee about the controversy surrounding the €1.6 billion sale of Nama’s Northern Ireland loan book, known as Project Eagle.

“I stand over that the fact the taxpayer got value for money.”

Mr Daly said the agency has no knowledge of any wrongdoing involved in the sale of Project Eagle.

Mr Daly said there has been much coverage of various aspects of the transaction but it relates those involved in the purchase side.

Nama has met the UK National’s Crime Agency over the sale of Project Eagle. He told PAC: “The chief executive and I met the UK’s National Crime Agency some weeks ago and provided them with an overview of Nama and the chronology around the sale of Eagle.

“It is our clear understanding, based on that engagement, that their investigation is not in any way concerned with the Nama sale side of the transaction.

“Their focus appears to be very much on the purchase side and what may or may not have taken place in Northern Ireland.”

Mr Daly said there had been an allegation made that the Irish taxpayer had been “robbed” by the sale of Project Eagle.

It had been claimed the sale of the portfolio, which sold for £1.3 billion, could have sold for up to £5 billion.

He said: “There is no certainty that this projected profit will be achieved ultimately, given the difficulty of predicting the performance of markets and of economies.

“In essence we were faced with a choice of taking a certain £1.3 billion in cash upfront, or taking the very substantial risk of holding on for a potential upside of another seven or right per cent and putting this £1.3 billion at risk for a limited additional gain that may or may not be generated over a three to four year period.

“Knowing what we know now about this portfolio, this is a risk Nama was not prepared to take.”

Mr Daly described his relationship with Frank Cushnahan, a former member of the Northern Ireland’s finance committee, as “professional”.

He said the two men have not been in contact since his departure from the board in November 2013.

Mr Daly said allegations made by Independent TD Mick Wallace in the Dail this week were a “serious misrepresentation of the facts”.

The Wexford deputy has been to the forefront in raising concerns about the sale of the loan book of 800 properties in Northern Ireland, and the payment of €45 million in “fixers” fees to a number of individuals.

Mr Wallace had alleged Cerberus or fixers offered to sell debtors back their loans for 50 pence in the pound.

Mr Daly said it stretches belief that any debtor would have had paid 50 pence for an asset that was worth only 27 pence.

The chairman said it is difficult for Nama to properly address allegations being made against the agency.

Mr Daly said the claims are vague and implausible and no evidence is produced to support them.

He told the PAC: “It is unfortunate to say the least that in some cases those making the allegations appear unconcerned about the reputational or commercial damage that their unsubstantiated allegations may cause to the organisation concerned or to any individuals that they may name.”

He said there is no consequences for those making the claims but the damage done to the organisation “may well be impossible to reverse”.

Chief executive of Nama Brendan McDonagh said he submitted the financial results to the Minister for Finance yesterday.

Mr McDonagh said profit for the first six months of this year exceeded the full year profit figure for 2014.

The chief executive said he has written to the banking inquiry to provide them a detailed rebuttal of many of the allegations made by witnesses.

This is following criticism made by some developers including Johnny Ronan about engagement with the agency.

Mr McDonagh said he is prevented from discussing the witness evidence but insisted the agency deals with all debtors fairly.

He said: “There is no question no any bias in favour of, or against, particular debtors. Nama deals with its debtors, regardless of their public profile or the particulars of any case in a consistent and reasonable manner having regard to its statutory mandate.

“Any suggestion that Nama had some kind of unwritten agenda to damage debtors is utterly without foundation.”

Mr McDonagh said negotiations have been robust and that is to be expected.

He said: “I would rather hear debtors complaining bout our toughness than to hear that Nama is being accused of being a pushover and not doing enough to extract the best return for taxpayers.”

The chief executive said Nama is not a cosy bailout and it makes no apology for being “rigorous, professional and fair”.

Earlier the PAC chairman alleged an effort is being made to interfere with the committee’s inquiry into Nama.

John McGuinness TD said the committee was “cautioned” and formally advised on how to conduct its hearing. He said: “This is an effort to frustrate the committee.”

Mr Ross said he believed this was a deliberate move by Mr Noonan.

Fine Gael TD John Perry and John Deasy said the accusation that the Minister was trying to frustrate the committee was wrong. Mr Perry said the working of the hearing had become political.

Chairman of the Northern Ireland Finance Committee Daithi McKay addressed the committee this morning. He said his committee had been frustrated by some “key witnesses”.

Mr McKay said the reluctance of Nama to appear before them is regrettable and insisted co-operation with the agency is necessary.

He added: “It has been more forthcoming than some witnesses, who continue to cite the criminal investigation as a reason for not providing written or oral evidence to the committee. I believe that is becoming more tenable than the day.”

“A lot of allegations have been made, a lot of new information has come into the public domain, since our last meeting. It’s a huge public interest story now,” Mr McGuinness told The Irish Times.

“Nama need to clarify all the issues raised, give the information. I’d like to see them co-operating with the investigation in the North. They will be asked about that today.”

“We’ve asked him to come on two occasions, but he’s said he’ll wait to see how this goes,” Mr McGuinness said.

“We now need to examine more closely the Project Eagle portfolio given the evidence by Deputy Mick Wallace that developers have agreed to settle with Cerberus by paying 50 per cent of the unpaid balance, which, if true, would see Cerberus making significant profits on the portfolio,” he said.

He said a number of other sales, including Project Arrow, and the evidence to the Banking Inquiry by developer Johnny Rohan, who was highly critical of decisions made by Nama in forcing the liquidation of Treasury Holdings, would also be discussed.

Mr McGuinness said the Committee was trying to assess whether or not Nama was delivering value for money.

From the Department of Finance, Declan Reid, a specialist in the Shareholding Management Unit, will give evidence.