Kenny says he has ‘taken rap’ in Seanad controversy

Taoiseach Enda Kenny was heckled in the Dáil this afternoon when he announced that John McNulty had requested Oireachtas members not to vote for him in the byelection on October 10th. Video: Oireachtas 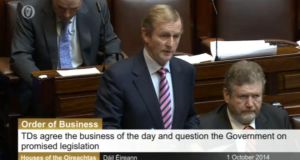 Taoiseach Enda Kenny has said he has “taken the rap” for the Seanad/Irish Museum of Modern Art (Imma) controversy which has dominated political proceedings since erupting last week.

Speaking at a jobs announcement in Dundrum this afternoon, Mr Kenny said he would not name the official or officials who recommended John McNulty to Minister for Arts Heather Humphreys as an Imma board member because they could be “pilloried”.

With the Fine Gael parliamentary party meeting set to get under way this evening, Mr Kenny said Fine Gael was a very big party with a lot of different views.

“I do hope that from our own party point of view I can weld everybody together because...talent might win games but teamwork and intelligence wins championships.”

It emerged last week that Donegal businessman and Fine Gael activist John Nulty had been appointed on September 12th to the board of Imma by Ms Humphreys.

The 37-year-old was appointed to Imma just days before his nomination as Fine Gael’s candidate in the Seanad byelection to replace Deirdre Clune who has been elected to the European parliament.

He was to replace Ms Clune on the Cultural and Educational Panel of the Seanad and the Imma appointment would allow him to demonstrate knowledge of the area.

He has since stepped down from Imma and has attempted to pull out of the Seanad race but the incident has been a major political embarrassment for Fine Gael and for Taoiseach Enda Kenny amid accusations of of “cronyism” and “stroke-pulling”.

Mr Kenny said today: “I accepted responsibility for a system that’s flawed. People were appointed to State boards in the past that could lead to a perception that it’s all political cronyism.”

He said the system had been in place “since the foundation of the State” but future nominees to boards would be assessed externally under a new system “entirely removed” from the political process.

“Clearly people can be pilloried in the public media if any names are mentioned. These are ordinary staff who work for the Fine Gael party the same as staff in my own office of the Taoiseach.

“Obviously I have taken the rap for this, put my hands up, accepted responsibility, apologised for the whole process and not only that, I’m doing something about it now.”

Minister for Agriculture Simon Coveney said today Fine Gael members were “frustrated and angered by this mess”, adding that he expected Minister for Arts Heather Humphreys to address the party meeting.

Mr Kenny told the Dáil earlier that Mr McNulty did not raise the question of his being appointed to the Imma board when the two discussed his possible nomination for the Seanad byelection.

“He did so, later on, when the Fine Gael personnel were dealing with the preparation of his CV.”

Mr Kenny said he was sorry if he had confused the Opposition on the issue.

The Taoiseach was replying in the Dáil to Fianna Fáil leader Micheál Martin and Sinn Féin president Gerry Adams who accused him of not answering questions on the controversy.

Earlier, Mr Kenny said he had discussed the operation of the Seanad with Mr McNulty and his capacity to be a good Senator and to serve in the area where he came from.

No instruction had been given to Minister for the Arts Heather Humphreys on the issue. She herself read his qualifications, read his credentials and appointed him, as she was entitled to do, to be a member of the board of the Irish Museum of Modern Art (Imma), Mr Kenny said.

“He did not know at the time he was appointed whether he was going to be a candidate for the Senate or not,’’ the Taoiseach added.

The Taoiseach said when he gave his imprimatur that Mr McNulty should be considered for a nomination to contest the byelection, the Fine Gael system of validating candidates took over.

A sub-committee of the party’s executive council considered the names for a nomination. Twenty-nine people were being considered and Mr McNulty indicated he would like to serve on a cultural board.

Mr Kenny added the Fine Gael official dealing with the matter did not go back to the sub-committee, which was a cause of great “angst and a cause of concern” to him.

Amid heated exchanges, Mr Kenny said it was time to move on; the process of appointing to State boards was flawed and was going to be fixed.

Mr Coveney, speaking on RTÉ’s News at One programme, said the matter had damaged the image and reputation of the Fine Gael party.

“The biggest insult you can give to a Fine Gael person is to accuse them of being like Fianna Fáil in terms of standards in public office, and that has been essentially what’s been happening now,” Mr Coveney said.

“Fine Gael people in particular across the country are frustrated and angered by this mess, because that’s what it is.”

He said the party had attached a lot of importance to political reform, “and this is a huge setback in the mindset of the electorate and the public”.

Mr Coveney said he suspected Mr Kenny had probably not named the officials who passed information on Mr McNulty to Ms Humphreys because he “doesn’t want to be pointing a finger at an individual within Fine Gael”.

However, the process by which Ms Humphreys got Mr McNulty’s CV and appointed him to Imma had raised all sorts of questions, Mr Coveney said. It had made people very cynical about the motives for it happening, “and that is what the Taoiseach is upset about”.