Opinion: A mixed list system would mean that at least some politicians would not have to worry about their party colleagues 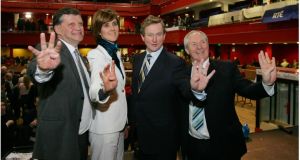 Four out of five for Fine Gael in Mayo. But do TDs from the same party spend too much time competing against each other? Photograph: Bryan O’Brien

One of the first politicians I followed on an election canvass was former taoiseach Liam Cosgrave in 1973. He was uneasy with journalists, particularly young ones in corduroy bellbottoms and platform boots, and his little moustache twitched suspiciously. As we set off to canvass the two-up-two-down redbrick council houses around Dún Laoghaire, I wondered why we weren’t hitting the more affluent roads. What sort of welcome would the leader of a centre-right party get in this working class district?

I needn’t have wondered. As the first door opened, it was clear Cosgrave was as welcome as Santa Claus. “Ah, Mr Cosgrave,” cooed the women as they thanked him for pleading their case with the council, or with social welfare. One woman, let’s call her Mrs Murphy, was too unwell to come down to the door.

“Did you get the bed, Mrs Murphy?” Cosgrave called up the narrow stairs.


Conjugal rights
It was my first real lesson in Irish politics. The TD who gets stuff for people will be re-elected. Sometimes people’s expectations are bizarre. One man walked into a country TD’s clinic, took off his wellington boot and held up his diseased toe. He wanted the TD to do something about his gangrene. Another came in and demanded that his TD stop the clocks changing to summer time the next morning. Another wanted the TD to marry his daughter.
Yet another wanted his conjugal rights restored. One Dublin TD was asked to go down personally and clear the leaves in the local park. One really sad woman wanted a TD to do something about the fact that her daughter wasn’t invited to a birthday party.

But most of those who go to TDs are looking for help with housing, medical cards, social welfare allowances, student grants, planning permission – or like poor Mrs Murphy, help with getting a bed. Why do they do this? Surely they are either eligible or they’re not. The truth is that they’re doing this because TDs create the impression that they can intervene successfully for them. TDs create the need. Why else do you think TDs like Bertie Ahern or Willie O’Dea went knocking on people’s doors at weekends when the next election was years away? Why does Michael Ring attend more funerals than a guild of undertakers?

Now, this has consequences. As the political scientist Jane Suiter pointed out in an excellent speech to the Reform Alliance’s monster meeting in the RDS last month, if intervention by TDs is allowing people to jump the queue for allowances or services – or get planning permission when they shouldn’t – then it is corrupting a public system that should deal even-handedly with every citizen. And if intervention by TDs is necessary to make the system work fairly, then we should fix the system.

In fairness to the many TDs I spoke to for this piece, they felt their intervention forced a quicker response from the authorities but no more. One told me that one of the most effective ways of forcing an official response was to put down a parliamentary question. Before the question was reached in the Dáil, the relevant department would have contacted him, he said.

So what should TDs be doing? They should not be competing with their constituency colleagues to do county councillors’ jobs, they should be engaging with politics at a national level and with the wider public debate. Too often the researchers they are now allowed to employ are diverted to constituency work. Too often they can’t clear their heads to think about policy because they’re worried about the equivalent of Mrs Murphy’s bed.

Ideological politics
What’s the answer? Something that takes away clientelism. It could be a single-seat constituency electoral system or a closed list system which means that you vote for the party ticket and the party decides who gets the seats. Or you could have a mixed list system. That would mean that some TDs, at least, can be free of worry about the party colleague who arrives at every funeral and every public meeting and asks loudly where you are.

The list system, some complain, leads to more ideological politics. Would that be such a shame? What if Mrs Murphy could vote for the party that best represented her class interest, rather than depend on her local political lord for a bed?