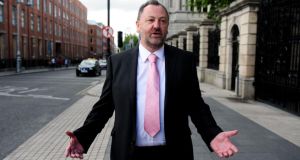 Denis O’Donovan: “If a US citizen tries to get a work visa or go a step forward and obtain a residence permit or citizenship in Ireland, he or she has as good a chance as a resident of Mars. Let us be real.’’

The State should face up to the reality of seeking to regularise the position of undocumented Irish in the US while failing to give “one iota of a chance” to Americans coming here, Fianna Fáil Senator Denis O’Donovan said. “It is a bad signal to send when we are looking for results on the other side.’’

Mr O’Donovan called for a “full and frank’’ Seanad discussion on Ireland’s relationship with the US, referring particularly to the 50,000 undocumented Irish.

“We all lobby hard to regularise their position and obtain green cards and, if they want to stay there, citizenship for them.

Mr O’Donovan said that while Ireland would welcome progress on the issue, there must be a quid pro quo.

“If a US citizen tries to get a work visa or go a step forward and obtain a residence permit or citizenship in Ireland, he or she has as good a chance as a resident of Mars. Let us be real.’’

He said he had come across a case involving a very well qualified young man who had been going out with an Irish girl for eight years and planned to marry. “However, they do not want to marry for the reason of obtaining a citizenship right.’’

John Kelly (Labour) highlighted the case of an Iraqi-born national, living in Saudi Arabia, who was trying to do business with a Galway-based company manufacturing affordable housing units.

He said the Department of Justice was refusing him a visa to come to Ireland for four days to view the Galway company’s product.

“It is time the department started to think about jobs,’’ said Mr Kelly.

1 Close businesses selling alcohol to on-street drinkers, restaurant group says
2 Ryan confirms travel ‘green list’ will come in after July 20th
3 Ireland is ‘weeks away’ from a second wave of coronavirus, doctor claims
4 Kanye West says he will run for US president in 2020
5 FF MEP apologises for flying to Dublin for election of Taoiseach despite Covid-19 rules
Real news has value SUBSCRIBE