State pension discriminates against women. It has to stop. 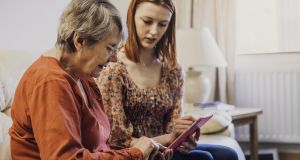 Sometimes scandals break when something previously unknown comes to our attention, but sometimes they erupt when the environment itself tilts, showing already known information in a new light. That’s the case now as issues concerning women and their pensions are bubbling up.

We know the financial discrimination women suffered – and suffer – in this country. Maybe now we might finally begin to reflect on how egregious that truly is, and examine ways to remedy it.

In the aftermath of the budget announcement, Minister for Finance Paschal Donohue took a call on Sean O’Rourke’s RTÉ Radio 1 programme from a man named Eamon Tynan who wanted to detail how much his wife was losing out on her State pension (€35 a week), all because she took a summer job as a secondary-school student.

Contributory pensions are based on contributions made during one’s working life, the “stamp” earned for every week’s work. Your contributions are divided by how many years make up your working life. In 2012, new applicants for a pension had to have double the minimum number of contributions they once needed – 520 – and new bands for reduced contributions were introduced, which for some people cut up to €30 a week from their State pension. That’s €1,560 a year.

But this “averaging out” of a person’s working life has an impact on women, because every year from when you start working until you stop is taken into account, regardless of the breaks you take. So a woman’s working career, from 18 to 66 might be 48 years, but perhaps only 38 of those were spent in the workforce. Nevertheless, devoid of 10 years of contributions, the number of years divided is still the same.

When those changes happened in 2012, 36,000 people had their State pensions cut, 62 per cent of whom were women, according to Age Action.

It wasn’t until 1994 that the practicalities of childrearing were taken into consideration regarding the qualifying conditions for the State pension. The Homemaker’s Scheme, introduced in 1994, disregards years spent working at home while caring on a full-time basis for a child up to 12 years. A maximum of 20 years can be disregarded that way. So, if you have spent 20 years raising your children full-time, those 20 years will not be added to the number of years you worked in total, and your PRSI contribution total will not be divided by them, leaving you with a higher average of contributions. The problem is, anyone who raised their children before 1994 isn’t taken into account.

The reasons women’s pensions are on shakier ground than men’s is linked to the economic vulnerability of women, a vulnerability often purposefully created by policy. Women earn less – historically, much, much less – and have been discriminated against in pension terms for taking time off work to have and raise children.

Of course, our pension schemes also ignore the outrageous marriage bar, which banned women from working in the public service and elsewhere, such as banks, when they got married, while men faced no equivalent. This forcibly removed from the workforce countless women who in another context would have continued working. The marriage bar was an act of gross discrimination against women, and that legacy of discrimination continues to be upheld into old age.

From 1932, no married woman was allowed to work in the public sector and some other workplaces. From 1958, married primary-school teachers (but not secondary) were allowed to remain in their posts after they got married. The marriage bar went in 1973.

The National Women’s Council has been campaigning on the marriage bar and women’s pensions for years, but the powers that be aren’t listening. The Government is not at fault for the marriage bar, but it can do something to remedy its legacy.

The current pension system benefits those who worked full-time without interruption, and it chips away at one’s pension payment if you took on a short stint of part-time work, because that counts when it comes to pension calculations.

The State pension scheme is heavily gendered, prioritising male work and ignoring the social and historical context of how women carry out their working lives. It also shows how the State enacted discriminatory policies against working women, and interfered with their economic independence.

Our unenumerated constitutional rights include the right to earn a living. What would be the cost of adjusting this?

There are three costs, really. The first is reversing the changes made by then minister for social protection Joan Burton in 2012. Tánaiste Frances Fitzgerald said this would cost €60 million next year and €10 million annually thereafter. The second cost is paying back the money people have lost from their pensions since then, €230 million. A third cost should be reparations for women forced to leave the workforce when they got married, between 1932 and 1973.

Taoiseach Leo Varadkar’s so-called “Republic of opportunity” should not just be about opportunities for those embarking on their careers, but also about the opportunities our mothers and grandmothers deserve in their retirement.

We should stand up for them, and so should the State.