Hospital accused of ‘arse covering’ in case of scoliosis patient 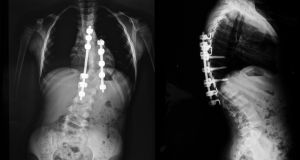 An x-ray taken of a person with scoliosis. Tallaght Hospital has been accused in the Dáil of engaging in an ‘arse covering exercise’ by confirming surgery for a scoliosis patient only after being contacted by the Minister for Health. Image: iStock.

Tallaght Hospital has been accused in the Dáil of engaging in an “arse covering exercise” by confirming surgery for a scoliosis patient only after being contacted by the Minister for Health.

Independents4Change TD Joan Collins said Mayo woman Aisling Corcoran had been waiting four years for surgery for scoliosis, a medical condition where the spine curves sideways, but the hospital only responded after she contacted Simon Harris.

Ms Collins said a consultant had twice cancelled surgery on Ms Corcoran “for personal reasons” but he had “made no professional contact with Aisling despite her ringing him continuously”.

She said that every time Ms Corcoran tried to contact him “the surgeon is out due to personal matters, his secretary has not spoken to him, he is busy between Tallaght Hospital and Our Lady’s Hospital in Crumlin or he is out sick”.

The Dublin South-Central TD said Ms Corcoran had rods inserted as a child but they were removed in 2014 because of infection. New rods were to be inserted but her care was transferred from University Hospital, Galway because of the lack of resources.

Ms Corcoran was assessed in Dublin in January 2016 and seen as a priority. Surgery was scheduled for last September but cancelled as was a second appointment in November.

Tánaiste Simon Coveney said the Government had received a letter on Thursday morning from the hospital making a commitment to complete the surgery in three months’ time.

Mr Coveney offered to meet Ms Corcoran after Leaders’ Questions as she and her mother were sitting in the Dáil public gallery during the exchange.

Ms Collins said that she too had received the letter that morning, but it was unacceptable. “This is an arse-covering exercise as far as I can see because the hospital had plenty of time” since January 29th, when she contacted the Minister.

She said Ms Corcoran’s case was a priority and an emergency and she should not have to wait three months because something else could happen in that time.

Mr Coveney said it was a complicated case that required two consultant doctors and could not be performed abroad. But he agreed that nobody should have to wait four years.

“It should have been dealt with before now but it was not. We are trying to ensure that it is and that the procedure can take place as quickly as possible.”