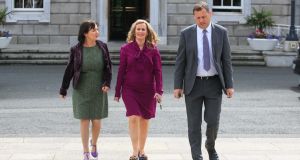 The Government’s expanded Department of Arts, Heritage, Gaeltacht, Regional Development and Rural Affairs is a “Frankenstein” department which covers the “Bean an Tí, ballet, bogs, and broadband”, the Dáil has heard.

He also claimed the Government dealt with the arts in a superficial way.

He said the arts section has lost 27 per cent of its budget, while the budget for heritage had been cut by 60 per cent.

“These are not victimless cuts,” he said, adding that the Government’s arts budget was one-fifth of the European average.

He said the Government was involved in “bogus economics” in this regard, citing an Indecon report that said that every €1 investment in the arts resulted in a €3 return.

Mr Tóibín was speaking during a two-hour Dáil debate on a Fianna Fáil motion on the arts, which was introduced by the party’s arts spokeswoman, Niamh Smyth.

The motion called for the arts to be designated a “distinct and clearly defined Cabinet portfolio” and for cross-party support for the development of Culture 2025 as a national arts policy.

Members of the arts community sat in the public gallery for the debate.

Ms Smyth said the expanded department effectively involved the “downgrading of arts from a Cabinet portfolio”.

Ms Smyth said the leaders of the 1916 Rising understood the importance of arts in national life and that it was ironic that the Government “chose the centenary year to put the arts further into the corner”.

She called for the Culture 2025 strategy to be discussed and voted on before it was accepted as State policy.

Ms Smyth said there was “anger, disquiet and disbelief” in the arts community at the “effective dilution” of arts from a Cabinet portfolio.

“Minister this may not be your decision but it is a bad one,” she told Minister for Arts Heather Humphreys.

Ms Humphreys, who accepted the Fianna Fáil motion, re-iterated the Government’s commitment to arts, and “to progressively increase funding to the arts as the economy improves”.

She said she was considering developing “cultural units” in every local authority, which would include arts officers and curators.

Ms Humphreys said: “I retain for the arts and I can assure the arts sector that it remains a priority for me.

“We put arts at the centre of the 1916 commemorations and the contributions by the cultural sectors should be seen as a demonstration of what can be achieved.”

Ms Humphreys said the Government had the chance to build on the collaboration “to assure that the vital nature of culture and creativity remains at the hearts of everything we do”.

She defended the expanded responsibilities in her department and said the creation of a larger department “sits well with the Government’s programme to strengthen the role of the arts”.

‘Endowment of the arts’

Labour’s Joan Burton said the “endowment of the arts” for the 1916 commemorations should be continued in both capital and current expenditure.

Ms Burton also called for a global forum on the arts, similar to the global economic forum.

However, Fianna Fáil’s Eugene Murphy said that under the stewardship of the last government, of which Ms Burton was a member, arts funding was cut in every constituency.

Richard Boyd Barrett of People Before Profit also proposed that arts funding should be increased to 0.6 per cent of GDP, which is the EU average.

He said it was easy for some “to utter pious words about their commitment to arts but then not to match rhetoric with real funding and support for the arts”.

The Dún Laoghaire TD said that both the Fianna Fail/Green government and the recent Fine Gael/Labour coalition had slashed arts funding by 30 per cent.

“When a case is made for the arts it often has to be justified economically and that should not have to happen,” he said.

“Stop arts being the soft touch whenever things get difficult.”