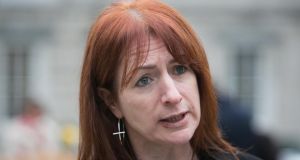 Clare Daly TD, who said to Enda Kenny: “How dare you attempt to have the arrogance to interpret the Constitution when it is only something our courts can do?”. Photograph: Gareth Chaney Collins

Independent TD Clare Daly’s Bill allowing for abortion in cases of fatal foetal abnormality was defeated by 104 votes to 20, with Sinn Féin’s abstention.

As expected, Wicklow Labour TD Anne Ferris defied the party whip and voted for the legislation.

Mr Kenny had again ruled out accepting the legislation, having received an opinion from Attorney General Máire Whelan that it was unconstitutional. He said the AG’s advice would not be published, in line with precedent.

Accusing Mr Kenny of a cop-out, Ms Daly asked if the issue would be included in the referendums planned for next spring.

“If you are not saying that, then you are letting these families down and, quite frankly, you are a hypocrite,” she added.

Mr Kenny said the matter was sensitive and tragic, particularly for the mother of the unborn child.

“It has been a long-standing situation in this country, where the advice given by the attorney general of the day has never been published,” he added.

“Now, what you want to do is fly in the face of all that, pass a piece of legislation and then have it tested by the Supreme Court, ” the Taoiseach said.

“I suggest to you, Deputy Daly, that is not the way to go.”

Ms Daly said it was rubbish to suggest her Bill was unconstitutional, adding only the High Court and the Supreme Court could adjudicate on that.

All the Taoiseach had was the Attorney General’s opinion, she said.

She said her Bill would enable women to terminate a pregnancy, surrounded by family and friends in Ireland, if they felt they could not continue with it and wait for the baby to die.

“Instead, you propose inaction, condemning those people to a lonely journey, most likely to Liverpool, surrounded by holidaymakers and business people, while the bottom comes out of their world,” she added.