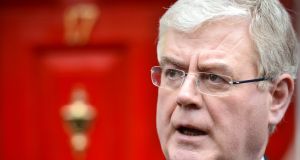 Consideration has been given to re-opening Ireland’s embassy in Iran but lack of resources prevents the Government having resident representation in Tehran, the Tánaiste has told the Dáil.

Eamon Gilmore said it would cost €500,000 a year to have a resident ambassador in Iran but the Government “is conscious of the political, economic and trade factors that might warrant the opening of resident diplomatic missions in Iran and several other countries”.

He said however that “current resource constraints do not allow us to have resident representation in all the locations that might objectively justify it”.

He also said the lifting of EU sanctions against Iran would be a consideration in re-opening the embassy.

Mr Gilmore announced the closure of the Irish embassy in Tehran in 2012 at the same time as the controversial decision to close its Vatican City embassy, both on cost grounds. Resident representation to the Holy See re-commenced this year.

The Tánaiste pointed out that EU sanctions against Tehran had been a “critical factor in bringing Iran to engage in the negotiations now under way to resolve the nuclear issue”. Sanctions had been eased slightly as part of an interim agreement.

“They can be removed if a comprehensive agreement is reached, as is now hoped.”

Fianna Fáil foreign affairs spokesman Brendan Smith said the new Iranian ambassador to Ireland “is very anxious that we move on and give added impetus to the diplomatic and the trade relations between both countries”.

Iran is an important trading partner for Ireland with business worth €51.5 million a year, Mr Smith said. When sanctions were introduced in 2012 trade between the EU and Iran was €28 billion annually but was now down to €6 billion, while Iran’s annual trade with China had risen to €40 billion with expectations that it would reach €100 billion.

Mr Smith said it was important that Ireland had the best possible diplomatic presence in the Middle East to assist the many Irish companies doing business there.

But Mr Gilmore said sanctions hurt the countries imposing them as well as the targeted country. The sanctions were introduced to encourage Iran to participate in the talks on their development of nuclear power. “Participation in the talks is not just about being physically present at the talks but it is also about being fully engaged,” he added.

He said the lifting of sanctions “is one of the contexts in which we will in the future consider the possibility of re-opening a resident mission in Tehran”.

He told the Fianna Fáil spokesman that after nine years of “stonewalling” by Iran, the willingness of the new government there to engage serious was very welcome. The Iranians had continued to engage seriously and with a will to reach agreement “but we do not yet know if Iran will be able to accept the essential compromises to reach an agreement”.

Mr Gilmore added that there were “elements in Iran which may be unwilling to reach agreement, so we and our EU partners are doing what we can to encourage Iran to continue on the new course and to reach agreement”.