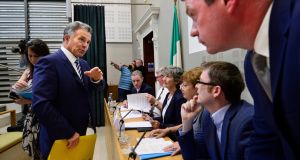 Chairman Sean Fleming at the release of the PAC finding into the financial procedures at Templemore Garda College. Photograph: Cyril Byrne

It was “unacceptable” that Garda Commissioner Nóirín O’Sullivan did not inform the Comptroller & Auditor General of financial issues at the garda training college in Templemore as soon as they came to her attention, the Public Accounts Committee has said.

In a report published on Tuesday, the committee also said there were grounds for Ms O’Sullivan to make a disclosure about the financial issues to then minister for justice Frances Fitzgerald in July 2015 and that one should have been made.

It says there was “a greater concern to minimise reputational damage to the organisation” than to deal with issues raised.

In its first report on financial matters at the college, the Dáil committee noted that the commissioner became aware of financial issues at the college on July 27th 2015, but changes needed to deal with matters have yet to be completed.

“It is the opinion of the committee that the delay in dealing with the matters is unacceptable,” the report says.

The committee also said the commissioner stated she had taken “decisive action” when informed of financial irregularities, by setting up a steering group, but that a working group on the issue already existed.

“Expanding an already existing group did not constitute decisive action,” it says.

The commissioner’s assertion to the C&AG on July 31st that “all relevant information had been disclosed” was “not accurate” and “not acceptable”.

The committee also found there was a practice within the force of “not sharing pertinent information” with the garda internal audit section, or with the Department of Justice or the C&AG, which was unacceptable.

“It is the committee’s view that there was a culture within AGS of withholding information, providing inadequate information and keeping issues internal to avoid external scrutiny,” it says.

The report said even where there were efforts to highlight issues, “there was a systematic failure to take the necessary decisions to resolve the issues”.

There had been concerns about financial issues at the garda college within the force for some 10 years.

In March 2016, the garda internal audit section began examining finances at the college. It uncovered irregularities and evidence that money was being spent on gifts and entertainment. It also identified a large number of bank accounts and a non-transparent system of accounting.

In its role as spending watchdog, the committee has held four public sessions on the issues this year.

In its report, it says the delay in asking the garda internal audit section to examine the college was “unacceptable”. It also says the audit section did not receive adequate support to operate freely and there was “a notable lack of co-operation” with it.

It found there were “significant professional tensions” evident between members of senior garda management and “a notable absence of a sense of common purpose”. The “level of disagreement ” would undermine their ability to fully resolve issues, it said.

It described the transferring of large amounts of money from the Templemore bar account to the restaurant account as “irregular” and questioned if both the bar and restaurant holding credit union accounts was appropriate.

Access to the credit union accounts was only provided to the audit section on July 12th this year.

There was also failure on the part of some members of the Garda to understand or meet obligations under the Ethics in Public Office Acts. The committee has referred the matter to the Standards in Public Office Commission.

The committee also expressed “grave concerns” about financial oversight of the force by the Department of Justice and said it failed to meet basic standards of corporate governance.

Recommendations made by the committee include the introduction of a framework for “absolute clarity” on reporting of significant issues to relevant parties; the strengthening and upgrading of the garda internal audit section; and training in public financial procedures for staff at the college.

It also said the Garda should review processes for dealing with “conflicts and the risk of intimidation of staff” and all relevant garda staff should be notified of their obligations under Sipo legislation.