For all the summer school talk, politics is still a closed shop run by dinosaurs

Opinion: Each of the big parties has stood by while sovereignty has been eroded 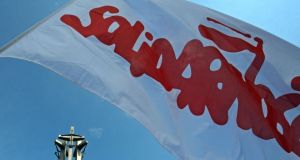 Poland in the 1980s reanimated its society around the concept of solidarity, but there is little solidarity in Ireland. Photograph: Getty Images

The Government is campaigning for the abolition of the Seanad. Others point to recent months, when dissenting Dáil voices have been crushed, to emphasise the importance of an independent chamber.

Whatever the outcome of the referendum, the case for wider political reform remains and the political mainstream will fight it every inch of the way. It is not in their interests. They will focus on details such as the number of days/weeks the Dáil is sitting – as evidence of “reform”.

The one institution that remains unchanged despite all that has happened in the last five years is the political system. A fair description of it would be dinosaurs operating a cartel. There is a pretence there is a distinction between the three larger parties. The two main ones – Fianna Fáil and Fine Gael – have obscure names – and the third, Labour, is separated by a chasm from the values of James Connolly. The cause of the divide between FF and FG has no resonance in contemporary Ireland – it is rooted in history.

Founding principles
In any event, each of the three has long departed from their foundational principles. Each has demonstrated it is prepared to sell out on any residual echoes of such principles to acquire – and retain – power; and they are not too keen on fellow politicians who take a different view. Fine Gael took on the bailout agreed by Fianna Fáil with hardly a pause for breath. Labour has been willing participants in the most regressive budgets in modern history. Fine Gael has rejected the pro-life mandate with which it was entrusted. Fianna Fáil is largely a party of expediency, alienated from the membership and the few principle-based members of the shadow cabinet.

Each of the three has moved in and out of coalition, according as the weariness of the electorate has required.

Promises and commitments made “before the election” count for little. Even politicians now acknowledge as much. There can be little doubt any of the three would form a coalition with Sinn Féin if, in the words of the press release that would, no doubt, accompany such a development, “it were in the interests of the country”.

Each of the parties has stood by passively as national sovereignty has been eroded. This used to be something our system purported to care about. Germany has no such scruples about defending its sovereignty in its constitutional court, as the willingness of the Bundesbank to square up to the European Central Bank this year clearly demonstrated.

Barriers to entry
It’s all very much a closed shop. There is an intense dislike on the part of the incumbents of those who would challenge “the way that it’s always been”. The barriers to entry are formidable.

The sheer extent of voter dissatisfaction (apart from those who vote with their feet and leave the country) simply does not square with the absence of new parties willing to put new propositions on the economy to the public. There is a real fear about challenging the status quo that’s new and probably intended (the controllers, as Noam Chomsky deems them, have been rereading their Machiavelli).

“Reform” is driven by those deemed to have “a safe pair of hands”. Election manifestos have as much relevance as “prebudget submissions” to the Minister for Finance. No one reads them with intent to commit the crime of reimaging policy or our “democracy”.

Poland, in the cauldron of the 1980s, reanimated its sense of political self-worth around the concept of “solidarity”: there is no sense of solidarity in Ireland – or of “respect” for the person in the queue or the polling booth.

Does this matter? And would any of the “new crowd” be different? It matters there is such cynicism and frustration about the governance of the country. It matters this governance has been wrested from the people and arrogated to the politically powerful and to political technocrats.

It matters that democratic debate can be stifled by the guillotine and the (mis)use of the whip’s office. It matters that the hearts of tens of millions in the euro zone are broken by long-term unemployment while political “leaders” talk about “staying the course”. It matters that fresh ideas and people are being deterred by the mindset that says: “Sure, can’t they join the parties that are there – aren’t they good enough for them?’” It matters all right.
Prof Ray Kinsella lectures in economics and is editor of Acute Healthcare in Ireland

Dublin City Council seek use of Docklands tower block for social housing 02:06
Europe enforces restrictions to avoid ‘millions’ of deaths 02:02
‘I don’t want to be in Mountjoy Prison, nobody does’ 01:25
Mountjoy prisoners gain access to third-level education during pandemic 01:24
Science books to peruse this pandemic winter 01:00