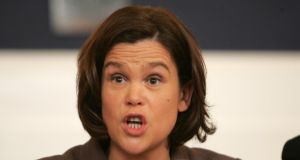 A call has been made for the Government to introduce emergency legislation to prevent the continued payment of controversial top-up allowances to senior executives in voluntary hospitals and health agencies.

Sinn Féin deputy leader Mary Lou McDonald called for the legislation following revelations in yesterday’s Irish Times that some senior executives may be allowed to keep their payments if they can prove they have a contractual entitlement to them.

It emerged last year that the chief executive of St Vincent’s Hospital received a top-up of almost €140,000 as well as a Health Service Executive salary of a similar amount and a privately funded car allowance of close to €20,000.

Ms McDonald said the Government, like its predecessor, was “swift to introduce emergency legislation to drastically cut the salary levels of workers across the public service and the Civil Service, including those not just on modest salaries but on low pay”.

Tánaiste Eamon Gilmore insisted the Government’s position was clear: “The pay caps established must be adhered to.”

He pointed out that the issue of top-ups was originally revealed because Minister for Health James Reilly sought an audit of the section 38 agencies and section 39 authorities which are fully funded by the State.

Mr Gilmore believed Dr Reilly “would have no difficulty with addressing these issues in the House and responding to questions that arise”.

He also said there had been ongoing engagement between the HSE and agencies on the levels of pay for some chief executives and there were a number of cases where contractual arrangements had to be examined.

But Ms McDonald said it was an issue not just for Dr Reilly but for Minister for Public Expenditure and Reform Brendan Howlin, the Tánaiste and the Government.

Mr Gilmore reiterated that the Government’s position “is that there must be compliance with public pay policy”.