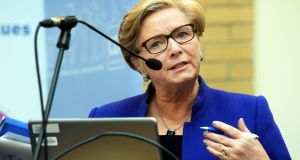 Operations are underway to secure the Leinster House campus and other locations around the State following Wednesday’s terror attack near the House of Commons in London, Tánaiste Frances Fitzgerald has said. Photograph: Eric Luke / The Irish Times.

Operations are underway to secure the Leinster House campus and other locations around the State following Wednesday’s terror attack near the House of Commons in London, Tánaiste Frances Fitzgerald has said.

Ms Fitzgerald said that “obviously we’re all concerned to ensure that all premises are secured as much as possible including this one”, she told the Dáil.

Fianna Fáil TD John Brassil asked what plans Ms Fitzgerald, the Minister for Justice, had to increase security arrangements for Leinster House and surrounding streets “given the relative ease with which an individual created havoc and destruction in Westminster”.

Ms Fitzgerald said: “I do want to reassure that you safety and security of locations around this country including this one is of prime concern to An Garda Síochána and they have all relevant initiatives underway in relation to that.”

The Tánaiste added that the recruitment of 800 gardaí this year was an important part of having a proper response as was the establishment of the emergency response unit which was now in operation in Dublin.

On the Westminster attack, she said the injuries suffered by an Irish person in the incident were not considered life-threatening.

She said the Irish embassy in London and the Department of Foreign Affairs would offer all assistance to the person and their family.

The injury of the Irish person and others from a host of countris were confirmed by British prime minister Theresa May in the House of Commons.

Ms Fitzgerald said the attack was “a cowardly and evil act against innocent and defenceless people’’.

She said the Dáil’s thoughts and sympathies were with the families of those who had lost their lives.

“We also think of the many men, women and children who have been injured and we hope for their speedy recovery.

She said she had spoken to British ambassador Robin Barnett earlier to express the Government’s sense of solidarity and sense of shock at the awful events.

“The ties that bind us across the Irish Sea are very close and strong and we feel very keenly that same sense of shock and horror that colleagues, family and friends in Britain feel,’’ she added.

Ms Fitzgerald said she had been briefed by the Garda authorities who were in constant contact with their UK counterparts.

While Ireland could not consider itself immune from the threat posed by international terrorism and extremism, an attack was possible but unlikely here, she added.