Constitutional challenge may be taken against Government plan 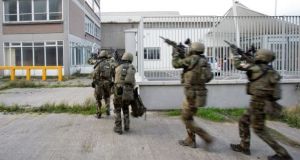 The Solidarity-People Before Profit TD Richard Boyd Barrett has said his party is considering a constitutional challenge to the Government’s proposal to join a new EU military framework.

On Thursday the Dáil voted by 75 to 42 for Ireland to join the Pesco agreement on greater European co-operation on military missions. The Government and Fianna Fáil supported the proposal; Sinn Féin, Labour, Solidarity-People Before Profit, Independents 4 Change, the Green Party and a number of Independents opposed it and claimed the Government tried to force it through the Dáil without proper debate.

Mr Boyd Barrett made his comments during a four-hour debate on Pesco – or permanent structured co-operation, a Franco-German initiative to pool resources and enhance the effectiveness of member states’ defence forces for missions under the EU’s common security and defence policy.

The Opposition said there was no rush and there should be a full debate, with Army and other experts being called in to give a detailed analysis. Opposition TDs called on the Independent Alliance to make its position clear before the Government voted on the move. The Independents 4 Change TD Clare Daly said the Ministers of State Finian McGrath and John Halligan, in particular, should do so, as they had in Opposition vehemently opposed the militarisation of Europe and an EU army.

But Tánaiste Simon Coveney, who opened the debate, denied that Ireland would in effect be joining an EU army. He added that the State’s “traditional policy of military neutrality is not going to change”. Ireland would decide which missions, in peacekeeping, counterterrorism, training and marine surveillance, to join, he said.

Fianna Fáil’s defence spokeswoman, Lisa Chambers, said that after the UK leaves the European Union it will be “extremely important that we as a member state show our support for the EU and its values”. She also denied that Pesco amounted to a European army, but she said that there should be ongoing debate about the role of the Defence Forces and that the Department of Defence should update the Oireachtas every three months about military engagements the State was involved in.