Cowen offers to give evidence in public to inquiry 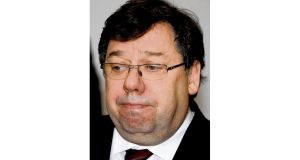 Taoiseach Brian Cowen said that the commission of inquiry into the banking crisis could decide to meet in public in whatever way it wished.

TAOISEACH BRIAN Cowen insisted that he would give evidence in public to the commission of inquiry into the banking crisis if it was required.

He said that the commission could decide to meet in public in whatever way it wished.

Mr Cowen added: “I have no problem dealing with these matters in any way that enables me to deal with my public duties and discharge them publicly.

“I am accountable to this House on a daily basis for every decision I have made, both now and in the past.

“I have no problem in regard to any of these matters as to how the commission wishes to proceed, and I will facilitate all of that without any difficulty in terms of how I deal with my responsibilities.’’

Mr Cowen was replying to Fine Gael leader Enda Kenny, who said that under the Commissioners of Investigation Act 2004, the commission should conduct its investigation in private unless in certain circumstances.

These were, he said, when the commission granted a witness’s request that all or part of his or her evidence be heard in public, and when it was satisfied that it was desirable, in the interests of both the investigation and fair procedures, to hear all or part of a witness’s evidence in public.

Mr Kenny said that public hearings would go some small way to at least enabling the public to see some people answer for policy decisions taken.

Mr Cowen said that the interaction between the Department of Finance, the Central Bank and the Financial Regulator, and all of the rest, was part of the scoping exercise that would be conducted by the bank’s governor and the independent expert.

The continuing political charge, said Mr Cowen, that he had a problem with the inquiry, was nonsense.

“What I did say, from the outset as Taoiseach, and have always said, is that these matters must have careful consideration,’’ he added.

“We have seen in the past, in the aftermath of tribunals of inquiry held under other Acts, that every time one is held, someone says ‘we will never do it this way again’.

Pressed by Mr Kenny to say that he would specify that hearings be held in public, Mr Cowen said that people should give their position based on any investigation that the commission wished to conduct.

“That is the position. There is no ambiguity about it,’’ he added.

“There is no reluctance on my part whatsoever. I have a responsibility to discharge and I will discharge it.’’

Labour leader Eamon Gilmore accused the Government of setting up an inquiry into everything about banking, except its own decisions such as the critical one to introduce the guarantee scheme.

“There were several issues involved in September 2008, particularly on September 29th, 2008, which require to be investigated and require answers,’’ he added.

The Government, said Mr Gilmore, was proposing to exclude any investigation of those issues.

Mr Cowen said the Government had made it clear that the purpose of the inquiry was to look into the background and causes of the problem, not the decisions taken to get out of it.

“Those decisions have been debated in this House ad nauseam, and all night on some occasions,’’ he added.

Mr Cowen said the Government had to get approval from the European Commission for that decision.

It was necessary, in the commission’s view, to avoid a meltdown in the Republic’s banking system at that time.