The Dáil has reconvened with a reduced numbers of TDs as politicians practice social distancing measures as part of the effort to tackle coronavirus. Video: Oireachtas TV 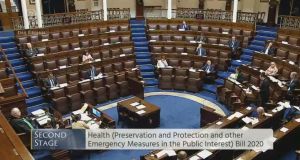 TDs sit two metres apart at an emergency Dáil sitting as new legislation is passed in response to the spread of Covid-19. Image: Oireachtas TV.

He was speaking during the Dáil debate on emergency legislation to give the Government sweeping powers in response to the pandemic.

The legislation is called the Health (Preservation and Protection and other Emergency Measures in the Public Interest) Bill and was passed on Thursday night without a vote. It goes to the Seanad on Friday.

Mr Coveney acknowledged that “what we’re doing today is not normal”.

He told the Opposition “we’re asking you to do it because it’s necessary” and said they would try to take on board amendments that were necessary.

The House adjourned a number of times as TDs awaited the draft of a Government amendment to ensure a clear “sunset clause” to the measures, particularly to public health measures that would give the State power to restrict movement and prevent mass gatherings, and compel people to stay in their homes.

The measures include providing for the detention of a person, based on medical recommendation, if they refuse to self-isolate. The amendment provides for the powers of detention to last six months until November 9th and to be extended only by consent of the Oireachtas.

Minister for Health Simon Harris, who introduced the Bill, rejected the description of the measures as “draconian”, which he said meant “excessively harsh” and this was not the case.

Independent TD Catherine Connolly insisted the proposals were draconian and said the original provision to keep the measures in place for two months should apply.

Fianna Fáil justice spokesman Jim O’Callaghan said, however, that emergency powers to prevent the spread of diseases had been in place for over 70 years and had not been abused, and he supported the Minister’s proposals.

Mr Harris said he was not going around trying to detain people but they were only introducing such measures if they became necessary to protect public health and were powers “we hope we’ll never need” to use.

The legislation also provides for sick pay and social welfare benefits to be paid immediately to those who contract coronavirus or who are laid off because of the impact of the virus, along with provision for the self-employed to receive welfare payments.

Mr Harris said the payments would be made from March 9th to May 9th but could be extended further if required.

The Minister said all parties need to work together and “there is no time for party politics during this pandemic”.

Earlier, Ceann Comhairle Seán Ó Fearghaíl opened the unique sitting and said that the coronavirus crisis will pass, but “not before it has scarred our nation and hurt many people”.

He described the emergency legislation being debated as one step in the long and “exhausting” marathon ahead to deal with the crisis.

Mr Ó Fearghaíl described the disease as “cruel and capricious” and said it had left society “utterly shaken”.

He said that “in the time ahead we must be resilient, sensible and cautious” and added that common sense and factual information should prevail and “not rumour and ill-judged mutterings on social media”.

Sinn Féin health spokeswoman Louise O’Reilly said she had “sobbed my heart out” this morning listening to the heartbreaking stories of some of her constituents because of the crisis.

She said staff in her constituency office were dealing with people “whose lives are falling apart”.

The Bill allows for mass gatherings to be shut down and provides powers to order groups of people in certain areas to stay in their homes if necessary.

It allows for the detention of a person, if a medical recommendation has been given, should they refuse to self-isolate.

TDs sat at designated seats, two metres apart, with only 50 TDs in total assigned to attend the debate.