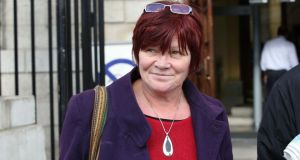 She said her department had a number of programmes to improve access to food for vulnerable people. The school meals programme would spend €39 million this year, an increase of €2 million on the last budget.

She said Ireland was one of the best-performing countries in preventing poverty, with an OECD report last month putting it slightly behind countries such as Denmark and Sweden.

“Our recovery is noted for the level of protection we have had for people on social welfare incomes and this can be seen in the OECD report,” she added.

Independent TD Joan Collins asked why so many children were receiving free meals. She asked: “Is it because people do not have enough money?”

Ms Collins said the minimum wage should be increased, or else the Government should subsidise food for people on certain incomes.

She said if core social welfare payments were to be brought back to 2009 levels it would mean €40 extra a week for a couple and €27 extra a week for a single person. “This is what needs to be put back into people’s pockets,” she added.

Ms Burton said not every child who went to school without breakfast did so because the family did not have money.

In a small number of cases, parents might have issues which meant they were unable to prepare food at breakfast time, she added.