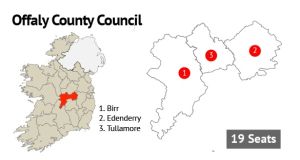 Sinn Féin were the big losers in Offaly as the county elected a Green Party councillor for the first time.

All three of the Sinn Féin seats were swept away, with the green wave bringing home Pippa Hackett in the Edenderry Area at the expense of Alan Davy.

Ken Smollen, retired garda and founder of the Irish Democratic Party, won a seat in the Tullamore Area, where Sinn Féin’s Anne Marie Ennis trailed in last of the 12 candidates.

In Birr, where Carol Nolan was elected for Sinn Féin in 2014 before winning a seat in the Dáil and then leaving the party because of her opposition to abortion, first-time candidate Clare Claffey was elected for the Social Democrats with Seán Maher losing out.

Hackett, an organic farmer and equine scientist who lives in Geashill, joined the Greens three years ago on the recommendation of her neighbour, Irish Green Party founder Christopher Fettes.

Smollen, a native of Tullamore and resident of Clara, has been campaigning on food poverty and mortgage distress issues and ran for the Dail in 2016.

Claffey, who lives in Banagher, was a prominent member of the Abortion Rights Campaign in Offaly. Her election, and that of Hackett’s, means Offaly no longer has the distinction of being an all-male council.

The poll also saw the return to the council in Tullamore of an Independent, Seán O’Brien, a former Labour representative.

Sinn Féin’s chances were severely hampered by the decision of two of the 2014 poll toppers, Martin O’Reilly in Edenderry and Brendan Killeavy in Tullamore, not to defend their seats.

Fianna Fail retained their eight seats and they had an especially impressive showing in the Tullamore Area, where a 46 per cent share of the vote saw them win four of the seven seats.

Renua Ireland leader John Leahy topped the poll in the Birr Area but his running mate Monica Barnwell was not in contention for a seat, and in the Tullamore Area, Renua candidate Brendan Galvin polled well but was eliminated on the seventh count.

An alliance of Fianna Fail and Fine Gael has controlled the council for the last five years but that arrangement is now likely to be reviewed.

John Foley, the Independent re-elected in Edenderry, is a former Fianna Fáil member, and if his support is secured, the party need just one more councillor for a majority in the 19-strong chamber.