Not retiring quietly, Ruairí Quinn has harsh words for critics 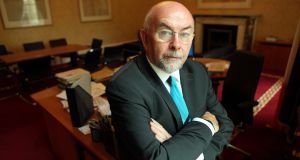 Ruairi Quinn: “Ireland is a very conservative country. There are only two countries of the 28 EU member states that have never had a Labour-led, or even majority Labour government: Latvia and Ireland.” Photograph: Frank Miller

There is a poignancy about the rows of black-and-white photographs of Labour TDs that line the long corridor leading to Ruairí Quinn’s Leinster House office. Dignified men and women gaze gravely at the camera, most of them long forgotten along with their fierce, principled battles that have punctuated the party’s near 100-year history.

A painting of six red roses hangs in his office, a 60th birthday gift, symbolising six decades and a devotion to Labour that began in his teens.

He turns 70 in April and radiates more energy than most 50-year-olds. Hours of hillwalking and a blazing curiosity about the world probably help. There is also that combative attitude, developed growing up in a big, “disputatious”, middle-class family given to discussing world affairs at length over dinner, “where you sat at a table and learned to argue and not shout at each other”.

There is no shouting now either, more a deep frustration, disappointment and the sadness of a man first elected nearly 40 years ago, now facing into retirement amid unprecedented levels of abuse and venom.

Yet the truth is that the party to which he has devoted a lifetime has never taken more than 19 per cent in a general election and will pick up less than half that come Friday, if the opinion polls are accurate.

Had he foreseen that? “I hoped the people would still remember what they were facing [in 2011]. And I think when they come to vote, the results will be different to what is out there in the opinion polls. But I have no regrets . . . I regret the mistakes that we made, but if I hadn’t made any mistakes, I wouldn’t have had the successes.”

He cites an interview in which Paul Murphy of the Anti-Austerity Alliance-People Before Profit (AAA-PBP) said “he didn’t want to see himself walking the corridors of power, being in ministries”.

Labour, by contrast, wants power, because “if you don’t want power, you can’t effect change. And you have to get into power. And if you can’t get a majority, then the second best thing is a minority in a programme. And you argue for that and make your case.

“I have no interest in being on the backbenches, protesting and arguing because what I’m absolutely sure of is that no radical social reform would have occurred in this country and did not occur in any government that did not have Labour as a partner.”

Again and again, he returns to Labour’s achievements.

“Go right back to Frank Cluskey [Labour leader 1977-1981] – social welfare for deserted wives, for prisoners’ wives, for unmarried mothers . . . Tearing up the contraception by prescription; the marriage referendum; divorce mark two. The implementation of the European Court of Human Rights decriminalisation of homosexuality was carried through by Máire Geoghegan-Quinn [Fianna Fáil minister for justice in FF/Labour coalition] but the decision pre-dated that government . . . We didn’t do it on our own, of course . . . but the PDs [Progressive Democrats] who proclaimed themselves as a secular party with Fianna Fáil couldn’t get across any of those changes.”

He mentions Labour’s role in “getting rid of the brown envelopes and corporation donations”; its role in reform of the public service; reform of the legal system (“there’s been more in the last five years than in the history of the State”); the transformation of the role of the Catholic Church in education; the literacy programme he instigated as minister on foot of dismaying international comparisons; the momentum towards reform of the Leaving Cert and Junior Cert; the launch of the new apprenticeship system. Some of these are still working their way through the system but the momentum, he believes, is “unstoppable”.

As minister for finance in the outgoing “rainbow coalition” in 1997 he handed over a planned surplus, the first in about 50 years, to incoming taoiseach Bertie Ahern, to qualify Ireland for the single currency.

Now he proudly points to Ireland in 2016 as a State that is not Greece, nor Spain nor Portugal. Some would argue we might have done better if we had been Iceland. “No, we wouldn’t have done better. If you repudiate all your debts, all your obligations, all your contracts, why would anybody come here and invest? We have to produce things and sell them abroad. What product have you ever bought from Iceland?”

Then again, he has taken heavy risks in the quest for power. There was the U-turn on his third-level fees pledge, signed in the dying days of the 2011 campaign and constantly thrown up as an example of political chicanery.

Was that a mistake?

“No. It wasn’t a mistake,” he replies. “I was asked to sign a promise. I signed it in good faith. It didn’t make it into the programme for government. I wasn’t negotiating. People say ‘look, you’re smart enough to know the scale of the problem didn’t change overnight’.

“My great fear, in all honesty, was that Labour support would tail off in the last five or six days of the election, as happened in previous elections, and I just didn’t want that to happen. So it was a calculated political decision. In retrospect it was probably unwise.”

So he made a promise he knew might not be kept? “Yes. Because we weren’t going to get the majority government.”

How does he feel about having that attached to his name after nearly 50 years in politics? “I’m not terribly happy about it,” he says, pointing at other education areas where he proudly took a stand.

Cosying up to the right

“Yes, I did do that. I wanted a coalition with Fianna Fáil before the 1992 election, because the liberal agenda was never going to happen as long as Fianna Fáil were in opposition. Charlie Haughey had demonstrated they would oppose daylight if it suited their agenda and Fine Gael were too wobbly.”

It was always about effecting Labour policy, he says, always putting the country first.

“I have no regrets but I sometimes feel saddened that our sense of it is not everybody else’s. The Labour Party has always put the country first. Always. If we had not gone into government, if Tom Johnson had not led Labour into the first Free State Dáil and if Sinn Féin/Fianna Fáil/de Valera had refused to recognise it, we would not have had a democratic system. Labour was split on the Civil War, yet they chose to go in. Five times Labour went into government and every single time we knew this was going to cause trouble for the Labour Party.”

Then, with a barely discernible catch in his throat, he adds: “But I just love this country.”

Meanwhile, Sinn Féin is clocking up higher opinion poll ratings. “Well, Sinn Féin is Fianna Fáil in new clothes . . . The biggest shock in this country has been the disintegration of Fianna Fáil. We’ll know after this election if it has disintegrated or if it will revive. My own view is that if it does go into coalition with Fine Gael, which I don’t think is going to happen, most of the remaining members would join Sinn Féin.”

“In the present climate, there is nobody to the right of Fine Gael, nobody really criticising Fine Gael from the political side of things other than Lucinda [Creighton]. But we have AAA-PBP, we have Clare Daly, Mick Wallace, a whole host of others. The first people they attack is the Labour Party.”

Then again, the electorate in general seems entirely unappreciative. Does he feel that the voters have let the party down?

“I wouldn’t say they let me down. Ireland is a very conservative country. It remains immensely conservative to this day. Contours get set; traditions get established . . . There are only two countries of the 28 EU member states that have never had a Labour-led, or even majority Labour government: Latvia and Ireland.”

Pressed further, he suggests that people apply “much higher standards to Labour in government than to any of the other parties. Because they expect us to behave like a majority party with 19 per cent of the vote.”

In many ways, he blames the media. Ireland has maintained the inflow of foreign direct investment because it “retained its democratic structures, the rule of law, has a government that keeps its word, a legal system that functions a little more efficiently now”, he says. He shrugs. “But that’s not reported because it’s not news.”

“There isn’t a single government, not even the government during the second World War, that has faced the same crisis we have faced over the last five years. Not one. Right through the war, de Valera had control of his own money . . . And the fact that we’re now out of it and Greece are still stuck in it; the fact that Portugal is struggling to form a government and their bond rates have gone up; the fact that Spain had an election three days before Christmas and they still have not formed a government; the fact that we can borrow money at negative interest rates virtually and Moody’s are about to restore our full credit rating. Yet in the words of a talented writer, we are a puny little government. I find that offensive.”

He is scornful of the pundits and others like Eamon Dunphy “who were going to run in the last election and save the country and all we got was Shane Ross. Government is not easy. Politics is not easy – no more than drama or producing newspapers is easy.

“But to ridicule people with the scorn and venom that frequently comes from writers who are under pressure and deadlines, is not to make the world of democratic politics and public accountability a very attractive profession. In countries where it’s not an attractive profession, you get a standard of governance which makes what we do, this puny little government, pretty virtuous-looking.”

As he prepares to bow out of the Dáil, he sees a country that is “immeasurably better today than I would have thought we could ever have been when I first got an interest in politics”.

“You have to look with balance at the balance sheet. Every so often, it might just be nice to recognise some things that were done. Instead it’s ‘not enough, it came too late, you dragged your heels’.

“Am I satisfied that I got to do what I wanted to do? No, not all of it. Am I more realistic than I was 50 years ago? Bloody sure I am.”

Then he reels off some high points again and sums up a career: “For all the effort, for all the mistakes, for all the cul-de-sacs that you went up and had to come back down, it’s been a great journey.”