No vote would be a ‘big step backwards’ says Leo Varadkar 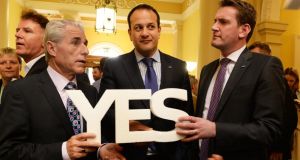 INMO general secretary Liam Doran (left) with Minister for Health Leo Varadkar and Minister of State Aodhán Ó Ríordáin at an event to call for a Yes vote in the same-sex marriage referendum. Photograph: Cyril Byrne

The Minister for Health Leo Varadkar has criticised warnings from the Church that they may not carry out civil marriages if the same-sex marriage referendum is passed.

Mr Varadkar said the Catholic Church has never been forced to do anything against its will and this would not change.

“Whatever rules the Catholic Church decides to make is their own business and it is their own prerogative,” he said.

“That will remain the case after the referendum. Twenty years ago, Ireland voted to bring in divorce - to allow people to divorce and have the right to remarry and that remains the case.

“Twenty years later nobody has forced the (Catholic) church or any church to remarry people against their own doctrine. I don’t see why they couldn’t continue to offer the same arrangement to catholic couples.”

Archbishop Eamonn Martin has suggested the Church may not continue to perform the civil part of wedding ceremonies if the vote is passed on May 22nd.

Mr Varadkar said rejecting the vote would send a message to gay people that they are not equal citizens under the law and that would be “unfortunate”.

to call for a Yes vote.

and rejecting the referendum would be a “step backwards” for the country.

He said he had received some letters offering prayers “to save his soul”since coming out as a gay man earlier this year.

Mr Varadkar said a strong message needed to go out that surrogacy has nothing to do with this referendum.

“What I think does need to be said is that this referendum is about marriage and about equal access to marriage by same sex couples,” he said.

“Under our Constitution a family is defined as a man and a woman whether they have children or not. Issues relating to children are not directly pertinent to this referendum.”

The Referendum Commission said it had received dozens of complaints about a poster from the No side which reads “Surrogacy?” and urges voters to reject the proposed amendment.

Mr Varadkar said the commission was independent and would never instruct them to make a statement. But he added: “ What I think is worth saying about surrogacy and as someone who is responsible for that legislation and as someone who has a background as a healthcare professional, the vast majority of people who avail of IVF or assisted human reproduction are straight people.

“That has always been the case and will always continue to be the case. The legal position in Ireland is that surrogacy is legal and if this referendum passes that won’t change.

“That will remain legal in the weeks thereafter and remains open to Government in future to ban it outright . That won’t change after the referendum.”