Consideration of all possibilities continuing, including a virtual event, officials say 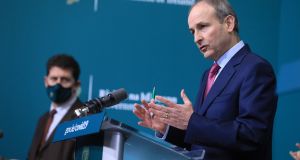 A Government spokesman confirmed there has not yet been a phone call between Taoiseach Micheál Martin and Joe Biden since the US president’s inauguration. Photograph: Julien Behal Photography

No decision has been made yet on whether Taoiseach Micheál Martin will travel to Washington, DC, to meet US president Joe Biden for St Patrick’s Day, officials said yesterday.

They said consideration of all possibilities, including a virtual event, was continuing.

A Government spokesman said the decision would be based on public-health advice, in both Ireland and the United States.

The spokesman confirmed there has yet to be a phone call between Mr Martin and Mr Biden since the inauguration, but stressed the two men talked after the presidential election.

The Taoiseach has traditionally visited the White House for a meeting with the US president around St Patrick’s Day, a trip that also includes meetings with congressional leaders. The tradition affords the leader of the Government a much-envied guaranteed slot with the US president every year, though the visit sometimes attracts criticism at home.

Several senior political sources who spoke on condition of anonymity said the prospects for the visit remained uncertain, and discussions were continuing. The uncertainty is in part due to the reluctance of the Taoiseach to accept an early vaccination, expected to be necessary for the visit to go ahead.

Senior sources around Government have privately discussed the potential political fallout if the Taoiseach and other members of Cabinet were to be afforded priority for vaccine shots in the coming week.

Two sources familiar with the discussions said that they expected a political storm if Mr Martin or his Ministers were prioritised. A Government spokesman yesterday confirmed that there were no plans to vaccinate Government Ministers early.

Other senior officials believe that to lose the annual White House meeting because of fears of political fallout at home would be shortsighted and contrary to the long-term national interests. Discussions are continuing within Government.